Late yesterday afternoon, Julia and I tuned into "Butter Live" on the GIYIreland website. It just sounded like such a kooky idea - making butter with people all over the world via a live feed from an elementary school somewhere in Ireland. We picked up a quart of heavy cream at the store, hooked up with the feed and we were ready to go. 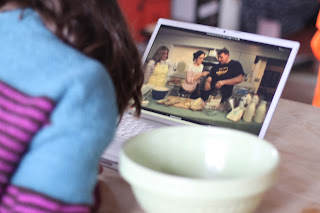 I heard about this from Ella McSweeney. And there she was on the computer sitting on the island in our kitchen in western Massachusetts. How wild! The original instructions said we would need a whisk. I was thinking we were going to have to "whisk" the cream into butter all by hand. When the feed started, I realized that a "whisk" in Ireland is actually what we call a hand mixer. The program began with a great little demo with a real farmer named Alan Kingston who actually makes butter (along with many other products) and sells it to consumers. American Imen McDonnell, author of the blog I Married an Irish Farmer, was along too They all explained why cream turns to butter and did a demo so everyone would know what they were supposed to do.
Ella has the entire video of it on her blog here. She says to start 10 minutes in..... It's fun to hear the accents and see the school children. You can follow along with the video and do this with your kids or grandkids. Julia was totally into it.... 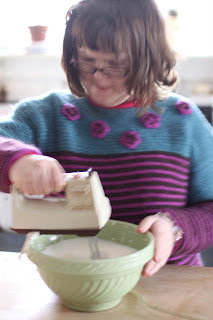 She mixed her little heart out. All of a sudden, the cream started turning yellow and the "buttermilk" began weeping out of it. We had done it! It's really nice to see her have interest in something like this. 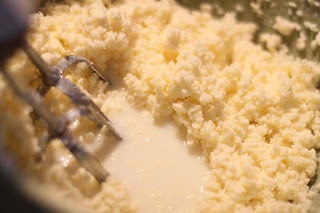 We then had to squeeze the extra liquid out of the butter with our hands. The Irish folks had "butter paddles" and made some great looking rectangles of butter. We put our butter in a ceramic bowl. From the quart of cream (which cost $5.59), we got 10 ounces of butter. As with so many homemade things, it isn't cheaper to make butter this way but it was a good lesson in how farm products are turned into items we rely on in the kitchen every day. 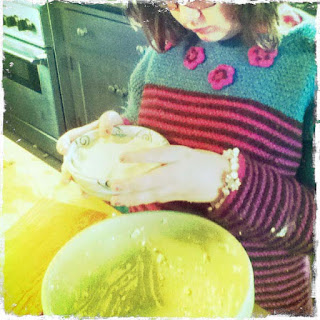 Annika the cat was fascinated by the whole thing. I think she was trying to figure out where the people were that were talking on the computer screen. 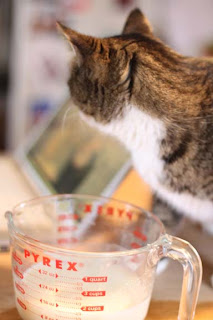 And she started drinking the buttermilk before I had time to jar it up. Score one for the cats. 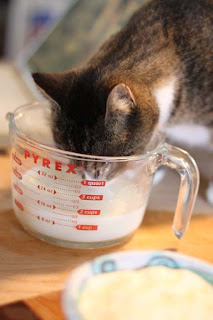 I was looking forward to breakfast this morning - homemade sunflower oatmeal whole wheat bread with homemade butter. If I had been really organized, I would have gotten the milk from my brother-in-law, separated the cream off of it, and really had homemade butter. 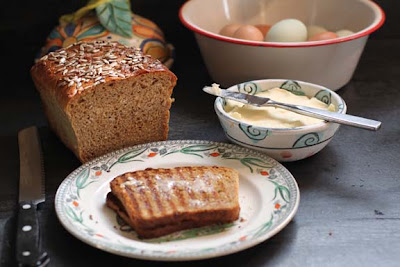 I don't think there is an organization quite like GIYIreland in the States. Too bad. It looks like they are really doing a lot to promote growing veggies and animals for real homegrown food. I will be looking on to see how their campaign progresses this year as the growing season ramps up.
And look what I found in my garden this morning - wow. There is hope that the winter will be over soon! 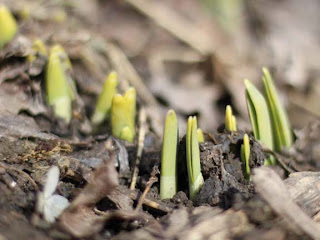 Happy St Pat's Day to you, too!

This is off the topic of today's post, but I just saw this on Facebook and immediately thought of you and your sheep farm. Tea bags (for watering houseplants, not for human consumption!) made from sheep manure! A possible farmer's market item? http://www.localharvest.org/sheep-manure-tea-bags-C16625?r=fr

Love this story, Kristen! And the pictures of your breakfast are enough to make me make my own butter!

That sunflower oatmeal whole wheat bread caught my eye....is there a chance you could share the recipe?

Happy St Patrick's Day to you!

Thanks for this, Kristin. I watched the video this morning and found it fascinating. I really didn't know what went on after the ruining the whipping cream stage! I can't wait to try it. Would you share your recipe for the bread? It looks yummy.
Julie