How Eeyore the Guard Donkey Arrived at Leyden Glen Farm 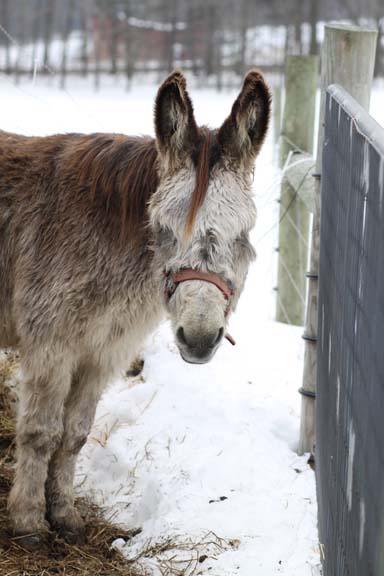 About five years after we moved to this farm, one of our neighbors asked The Farmer if he wanted a donkey. “Definitely not,” was The Farmer’s reply. “Are you sure?” asked Willie, our neighbor from up the road. “I’ve heard that they are good at guarding livestock from coy-dogs.” A "coy-dog" is the local name for Eastern Coyotes. That evening, we had a couple conversations about sheep, coyotes, and donkeys. Coyotes are the most tenacious predators of sheep so they are always a hot topic at our dinner table. And then the thoughts died away.
A few weeks later Willie revealed to us that he had “bought us” a donkey at the local livestock auction. The Farmer told me this one evening at dinner and I got a big chuckle out of it. I replied, “What was he thinking? Would you buy your neighbors a donkey on a whim?” We told Willie we weren’t interested in the donkey, thank you very much. What would we do with it? We had sheep. Donkeys need different food, different fences. We didn’t know the first thing about them. Willie found another home for the donkey - with a friend’s cows in a field down on the main road that we drive on when we go to the grocery store. The donkey looked happy with the cows. Things were good.
And then the coyotes started attacking late that summer. We lost lambs and lots of them..... Big ones that were just ready for market. No matter what we did to improve the fences, the coyotes still got in. You just can’t imagine the feeling you get when you walk into a pasture and find a half eaten lamb left behind. It is heartbreaking. Our farm was becoming a more important part of our income and every lamb meant lost dollars from our household. We were no longer "hobby farmers." We were trying to live off of our livestock.
Word travels fast here on our hill and Willie appeared one day, after hearing about the coyote loss. “Why don’t you take the donkey on a trial basis? If he helps with the coy-dogs, you can buy him from me. If not, I’ll take him back.” The Farmer and I talked it over at dinner that night and we decided to give the donkey a try. What did we have to lose? Only more lambs.
The next day, The Farmer met Willie up the hill where the sheep were grazing. The donkey was in the back of the broken down horse trailer. They backed the trailer in near the sheep and opened the door. The donkey had a red halter on him. He wasn’t very big  and seemed harmless enough. Out he walked and he joined the sheep grazing. Willie gave us the papers that he had gotten from the auction. That evening, we called the former owners who lived in Vermont and asked them about the donkey. They said he had lived with sheep for a couple years before as a guard animal. It was worth a try. We hadn’t paid for him yet. We decided to see if our lamb losses went down.
Julia was a little little girl then - not walking very well yet. The next evening we piled into the truck to go see the donkey. We hiked up the hill and there he was. What a strange sight - a big grey donkey amongst the flock of ewes and lambs. We decided to name him Eeyore after our favorite Pooh books. There was no other choice.
That fall, the coyotes seemed to stay away. We knew Eeyore didn’t like canines. Every time we brought the Border Collies into the field to move the sheep, he attacked them - trying to pick them up in his jaws by their backs and dropping them on the ground. It didn’t take long for the dogs to learn that Eeyore was dangerous. After a few visits, Eeyore learned that our dogs weren’t there to hurt the sheep but to herd the sheep. He began to leave them alone.
We called Willie and told him we would take the donkey.
The Farmer: “How much do you want for him?”
Willie: “$100 is what I paid for him.”
The Farmer: “Okay, I’ll bring you the money in the morning.”
It's been about five years now and Eeyore is still with us. He isn't a fool-proof solution to the coyote predation but he helps. Everyone has their job around here. It's an organic place full of personalities and quirks - both human and animal. Never is boring.... that much I will say.
at March 14, 2011

I loved your donkey story. We had two donkeys for about five years. They lived with us as pets, with the hopes of training them to be pack animals. Alas, it wasn't meant to be, as we couldn't carve out enough time for them. Eventually, they both got jobs in Montana, and moved there. Happily, they are now pack animals for a good friend, so we can go see them from time to time. Donkeys are such sweet and loyal animals, and I'm glad that Eeyore is doing a good job for you.

Life is full of surprises, isn't it? I loved reading about that shaggy guy. He's brought a smile this morning. Thank you.