Bleak November Days and Heading Towards Even Shorter Days....

We're almost done with November and the colors have gone from those beautiful autumn tones to just plain old gray. Yesterday was the grayest day that even I who am pretty upbeat most of the time just got weighed down by the dreariness of it all. Every day gets shorter and it makes it harder and harder to get much done outside. This time of year really gets to The Farmer just because of that. It seems we have barely taken the dogs on their morning walks around the fencelines before the sun has even poked over the mountain.... 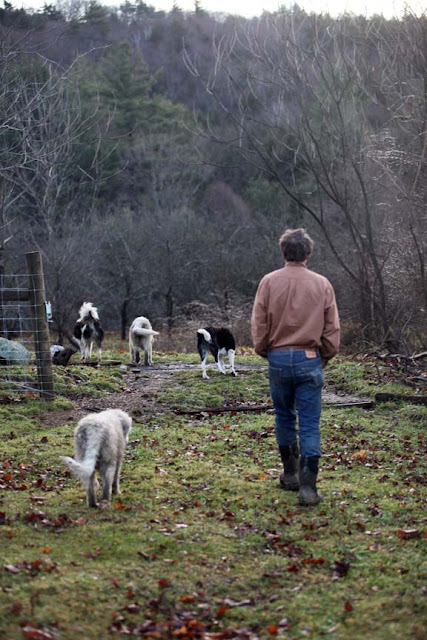 ....than we turn around and the sun is setting in the west. I don't have those seasonal problems with lack of light but I live with someone who does. Mostly I think it is is his frustration with the lack of time to get things done. His days are filled with moving hay from various fields up to the winter barns, picking up portable fencing that is spread all over the town, and trying to get the barns ready for lambing. I actually can't wait until the lambs start coming because it will give him something to focus on!
Seems like forever ago I have had any photos on here of sheep. They are still grazing what's left of the grass on various hayfields. Here are the adult ewes - all starting to show signs of pregnant bellies. Looks like a lot of sheep, doesn't it? There are about 230 ewes and 4 rams within that flock. That is going to be a lot of birthing! 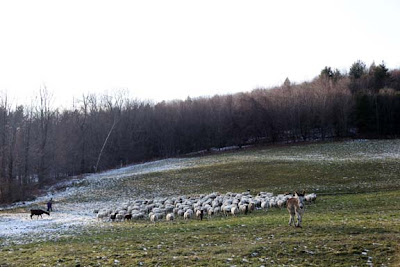 And here is Eeyore being friendly to all the onlookers on the Thanksgiving hayride. 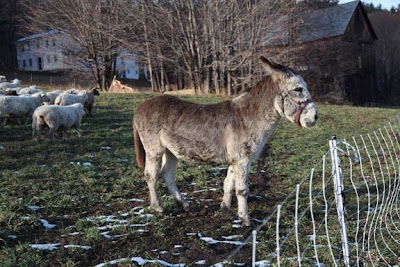 I feel fortunate that I have my knitting to occupy my evenings. I actually get rather charged up this time of year trying to fit everything in. Project ideas start flowing and it is impossible to get them all knit. But I try. I feel a bit burned out on cooking now and just want to eat soup that I can let simmer so I can knit instead of prepping meals. 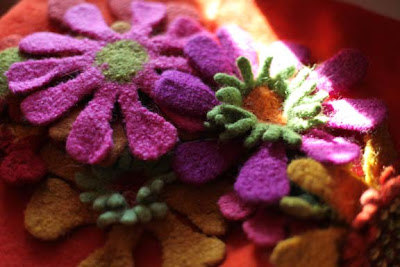 I heard from Debi, one of my regular readers who is crazily making flowers. She was having trouble with the seaming of the flowers so I snapped her a photo of before and after seaming. I'll share them with you here in case anyone else had the same concern. Her concern was that the centers didn't look round enough. You can see that mine don't either (photo on left). Photo on right shows after seaming when the funny looking piece turns into a center. Hope this helps!

You can buy the pattern on my Shop Page Here or on Ravelry here. (Sorry for the broken record but I know that lots of readers don't scroll down to older posts.)
I'll leave you with a photo of our house with the two Great Pyrenees puppies out front. The sheep had moved into the pastures yesterday morning and these guys took up their posts within the fences. These dogs are working dogs and will be living with the sheep their entire lives. They have very thick coats and should do fine. They have shelter in the form of a calf hutch with a hay bed but I haven't seen them in there for weeks. Every night they bark and bark and bark - good thing we don't have close neighbors. Their breed goes back thousands of years and they were bred to protect flocks of sheep in Asia and then moved to Europe. You can read more about Great Pyrenees dogs on this website if you are interested. I really think they are going to help our coyote predation problem. They have enormous barks that I think would scare anyone away. 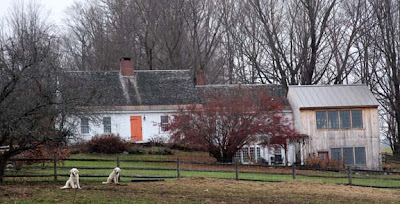 Love hearing about your dogs. I grew up on a farm in Minnesota and our dogs, usually shepherd-mixes, NEVER stayed inside, not even in the barn. They would chew/claw their way out, even in the coldest weather. What a great life for your boys, doing what they were bred to do.

My daughter has 5 large dogs on their farm--3 of them were dumped there early this summer. The first one to be left there is a half Pyranees- (he has the Pyranees feet)--He has the kindest most noble face. He developed a terrible limp--the vet said it happens sometimes in large breed, rapid growing dogs. He had surgery on his shoulder in Sept. Finally, he seems to be limping less, and the atrophied muscle seems to be developing nicely. The vet said he has a stoicism about him. His name is "Cowboy" and he is my favorite! He has taken to guarding the large rabbit hutch with my granddaughter's pet bunny. And, yes, he has the largest bark I've ever heard!

They are beautiful dogs! It's really start to get cold here as well. Love your flowers and your napkin rings/pins!

The FARMER needs a "Vacation"! -- However, I suspect That won't be happening any time Soon, huh? In which case, feed Him VITAMIN-D! But, no more than 500iu at a time and several times a day. It might not be noticeable, but it *WILL* help!

I love the picture of Eeyore with the sheep in the field in front of the farmhouse. It's dark here at 4:30 now because of the clock switch and we're in the Central Time Zone too. "And the sky is a hazy shade of winter". I have all my knitting planned for the winter and the yarn is all ready.

Oh, that sheep may safely graze..
I love all of the photos, especially the one where they are out in the pasture.

Your home looks like it could be in Wales, where my original home is. I was there last weekend and there were lambs already in mid-Wales. It's dark here early too, in the south of England and oh-so grey. Leaves plenty of time for the continuing blanket square journey, with my Julia yarn which makes me smile every time I look at it! Happy Days, even if they are a little shortened.