This was a Halloween Weekend to remember. Much to Julia's disappointment, Halloween didn't happen in western Massachusetts. Instead, it was a bit like Martin Luther King Day. Saturday's Farmers Market was quiet although many lamb shoulders were sold for stewing and my new Scotch Broth Soup recipe. My sister Lynn and Mom were here for the weekend to see my NH nieces play some sports. All plans went awry. Late in the afternoon, this arrived. 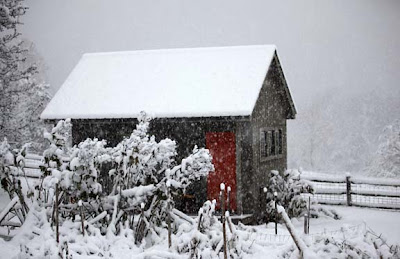 We were totally unprepared which I suppose is understandable since it was October 29th. Never do we expect a giant snowstorm in October before Halloween. Winter boots weren't even out of the closet. Snow shovels hadn't been thought of. And the sheep were supposed to out grazing the slow growing grass for another month.
After the Market, The Farmer scrambled to feed all the sheep in their different locations (right now there are sheep in four different fields spread over 5 miles). Everyone needed hay since the grass was going to be covered. The lambs in front of the house were the last to be fed. These lambs may or may not remember snow. They were born last winter. Sheep take everything in stride. Their internal clocks work with the sun and the moon. When it starts getting dark, they begin to come into their night pasture. It's a bit of a routine.
Saturday chores began a little earlier than dark. It was a white-out. My sister and I fed the "Livestock Guard Dog" puppies Archie and Winston and bedded down their calf hutch with some fresh hay. Then we gathered kindling and firewood. Chances are power would go out and we would lose heat. We had to get some wood into the house, find the oil lamps and flashlights all just in case.
The storm blew in - much harder than I ever thought was imaginable. Archie and Winston went with the flow. This was their first snowstorm. 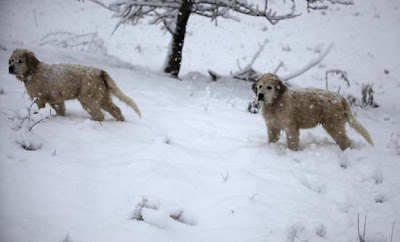 The first group of lambs, waiting to come in for the evening. 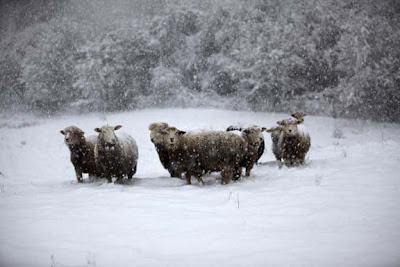 Nessie watched and waited as more sheep came in. 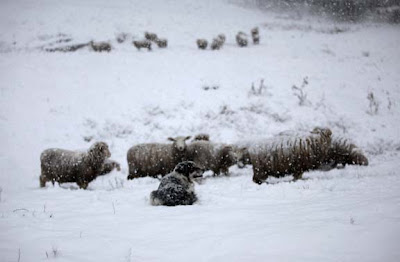 She listened for The Farmer's next command. 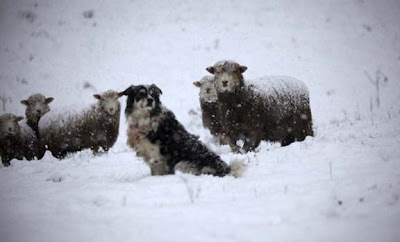 They arrived in batches, then realized they were late to the party and began to run. 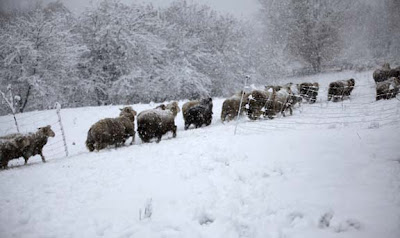 Archie and Winston were close on The Farmer's heels. 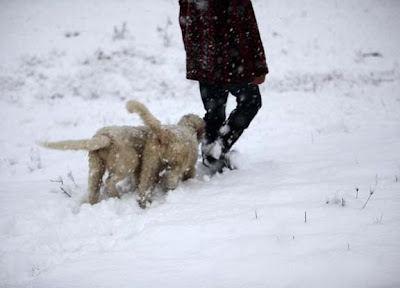 Buttoning everyone up for the storm, closing the fences. 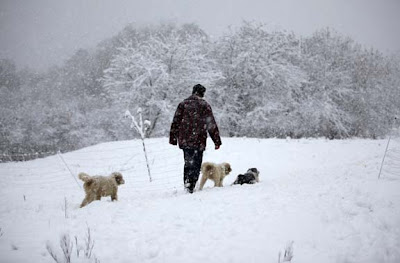 I love how this photo looks so neutral except for the cream colored puppies and The Farmer's plaid winter coat. 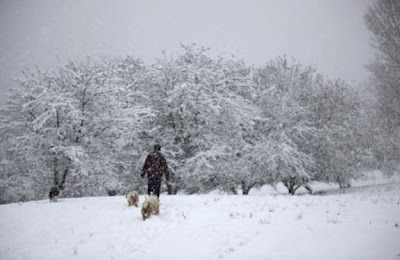 We lost our power for a day and a half. We survived just fine. Although our power is back, there are still hundreds of thousands of people who are still without power. Schools are still closed and last night's Halloween didn't happen. What is going to happen with all that candy? It is supposed to be in the 50's today and hopefully some of the snow will melt so the sheep can graze again. If not, winter will be here and they will have to get used to the hay. We definitely aren't ready for winter yet.
at November 01, 2011

Dear Kristin,
I have one of my sons at the University of Duquesne for guest studying law. He wrote me, that there was snow in Pittsburgh the last weekend, too. Here in Cologne/Germany, where we live, we actually have temperatures of nearly 20° on the 1st of November and I can't remember those sunny days before in this late time of the year. Last year, we had snow at the end of the month! Thank for your pictures of the snow storm.By the way, I'm a great fan of your blog and books ;-) Martina

Thinking of you every time I hear the news. Hope all continues well.

The storm was a doozy, and inconveniently timed..but the photos of it? SO beautiful.
(we got a milder version than you here on the shoreline but still, even a little snow on the ground for Halloween is weird).Sorry Julia missed the holiday.

Beautiful photos, Kristin. I feel we will get early snow, too, and have been scrambling to get everything ready. We are certainly ready in the wood department...he has been obsessed laying it in. They say this will be the worst winter, ever. We'll see. As long as the plane can bring my son & his girlfriend in for Thanksgiving from North Carolina and I can get in and out to get to Maryland to see my granddaughter, we'll deal with it.
xo, Cheryl

What a difference from the warm photos in your last post! Even south Texas is getting some cool weather, but we didn't have to cancel Halloween.

I hope this is just a short visit from winter and you will get some time to prepeare yourself for the white season. Greetings, Inge

The pictures are beautiful. I can't believe we were there at the beginning of October and now you have all this! I must admit I am glad I wasn't stuck on the tarmac at Hartford airport coming or going for knitting :) You and your family have been on my mind, hope all is well.

Great pics, per usual! Not what one wants to see in October, though. When I heard about the storm, I thought of youall! I knew there had not been news of moving the sheep for the winter grazing, so I thought: "bad timing!"

We are on hard freeze watch here in southeast central Oklahoma -- but no winter storm warnings.

May y'all get some sunny days!