Last Friday, our annual sheep shearing took place here at the farm. This is a big day on a farm like ours. The animals must all be gathered in from outlying fields which takes a huge chunk of time and effort. We only shear the adult sheep and the yearlings. The lambs will wait until next year. Their wool is barely long enough.

For the past twenty years or so, Kevin Ford from Charlemont, MA has been our shearer. Kevin is a "blade shearer" which means he shears with the old-fashioned kind of shears - blades that look like they could be in an history museum. 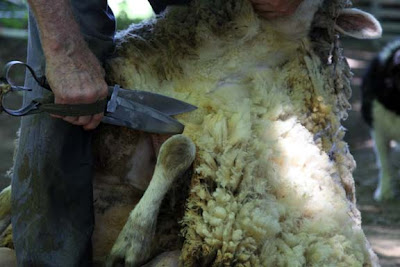 Kevin is lightening fast with these blades. 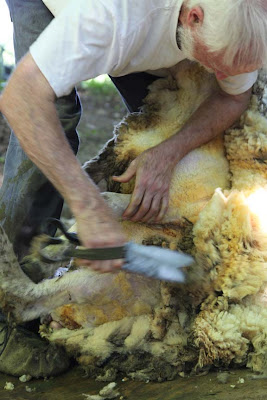 This is his tool box with his basics. The other thing he uses is a bucket of hot water to clean his shears. He constantly sharpens the shears with his sharpening stone between sheep. 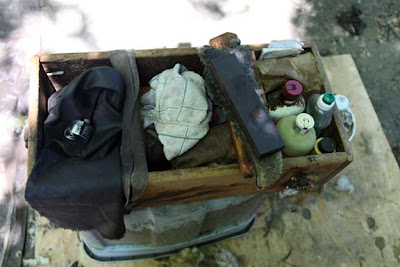 As our numbers of sheep have grown, Kevin hasn't been able to handle it all himself so he finds another shearer to help him out. For the past 4 years, Gwen Hinman comes from New Hampshire to shear with Kevin. 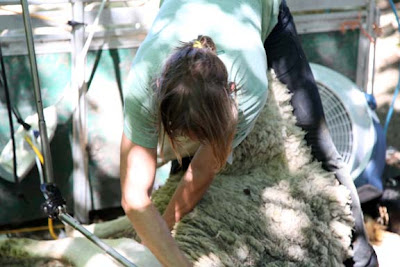 Both Kevin and Gwen are so lean and strong. They have good fun together and Kevin takes his numbers seriously, comparing the numbers of sheep he shears with blades to the number Gwen shears with electric shears. On Friday, Kevin did 70 sheep to Gwen's 120 sheep. (Kevin had already been here another day to shear the yearlings). That is pretty amazing, don't you think? Both Kevin and Gwen have sheared in New Zealand. Both of them travel the U.S. shearing small flocks. They each have an annual route they travel. We fit in when they arrive back home - that is why our sheep are sheared in July.

Of course it was the hottest, most humid day so far this year. We knew it would be and were racking our brains as to where to set up for shearing. We don't have a barn here at our farm which would be the easiest place to shear. The Farmer finally came up with a great plan. We sheared under the maple trees in the shade just behind our little lamb shack. The trees really helped to keep us cool on what would otherwise been a miserable hot and humid day. We set up the portable corral to hold the sheep, complete with a second holding pen for small numbers of sheep to be held, just before shearing. The Farmer handed each sheep off through the gate to the waiting shearer. 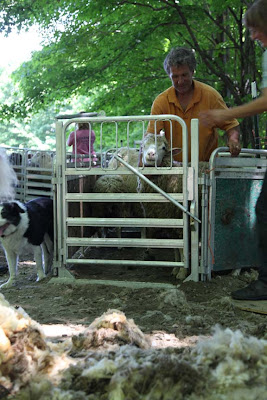 You have to be very strong to do this kind of work. Here's Gwen in the midst of her move to pull the sheep to the ground. The ewes weigh about 150 pounds and the rams 250 to 300 lbs. She makes it look easy. See the fan I set up for her. You have to treat your shearers right, including a nice meal for lunch. 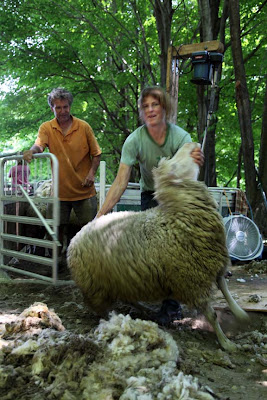 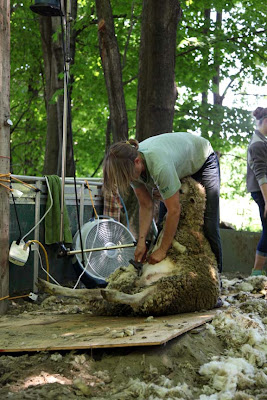 Gwen learned to shear from her father who was also a sheep shearer. She began shearing at 25. She makes a good living even if it is very hard and physical work. It didn't surprise me to hear that she had been one of the first girls to play ice hockey in her town. 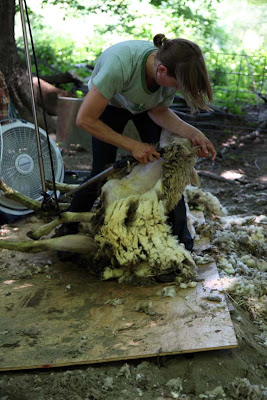 This girl looks totally relaxed doesn't she? She has had this done before so she knows she will feel cooler once it is over. 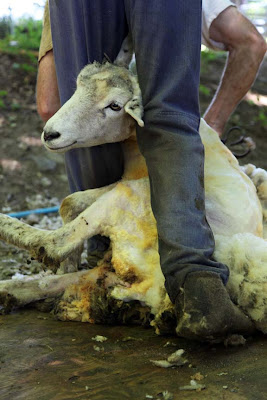 Some of the sheep have messier bottoms than others. Kevin and Gwen have to be really careful not to cut them. They pull the top knots (top of the head wool) and the bellies (belly wool) off from the main fleece and toss them aside. Then they clip the entire sheep. My job was to pick up the fleece, carry it to the plywood and then "skirt" the fleece of the nasty bits including sheep poop. Luckily we had a couple friends volunteer to help for a couple hours. But then I was left alone to pick through each fleece, separate the good from the bad and then toss it into the wool sack. 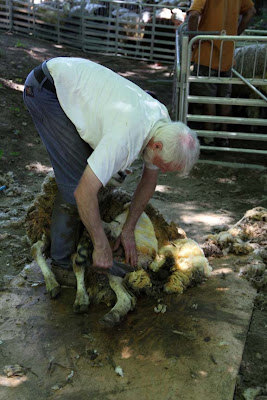 Matthew's job was to jump inside the plastic wool bags held in the wool stand and compact the wool to the bottom. He has grown so much since last year when he also helped us. He was a great help and had a fun day. In order to fit even more wool in the bags, The Farmer also compacted it by jumping on it. The bags aren't cheap and they are very strong so I wanted to fit as much in as I could. 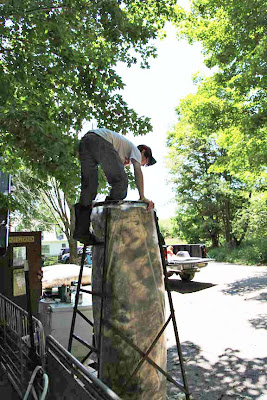 After each sheep was shorn, they were let go and ran off to join their shorn friends. Phoebe watched all day long, causing no problems. 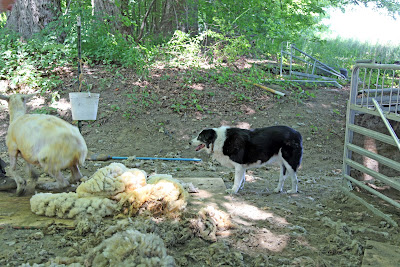 Kate on the other hand was so excited and so anxious about all the activity. How exciting - her first shearing. Can you believe how big she has gotten? 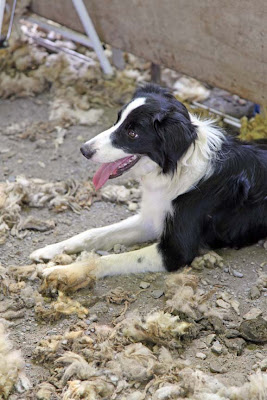 Kate became such a problem making the sheep nervous during shearing that she was relegated to the outer fence where she managed to run back and forth watching for 10 1/2 hours. 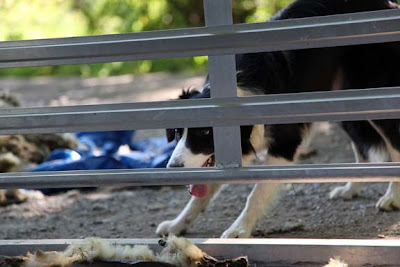 Winston and Archie just hung around, totally uninterested but wanting to be near the sheep and the people. 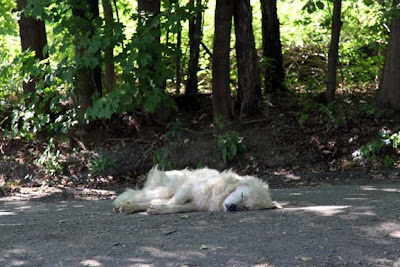 Here's what the wool clip looks like. All bagged up in seven bags - 240 sheep worth. Last year we had 12 bags - it wasn't packed tight enough. Lots more jumping on the wool with big people in the wool stand. 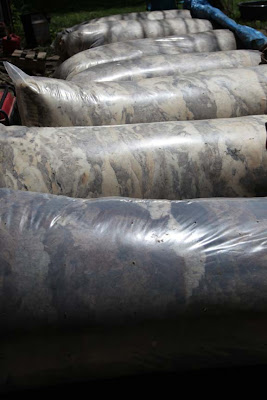 Gwen taught me how to tie the top and she promised me that the wool will stay inside. She said "Nothing fancy, just get the job done. Good knots will hold it."  Boy, I hope so. 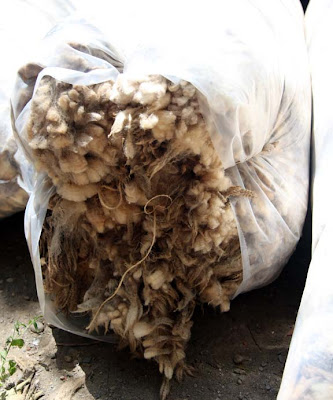 All the white wool goes into the bag. The black and grey wool is kept in a separate bag. Yes, this is all white wool - that is how dirty sheep get! Nothing a little washing can't clean up. 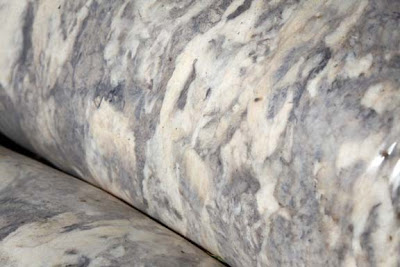 This is the pile of "tags" that I will be spreading around my yard as mulch. It really does a good job keeping trees and shrubs moist. It breaks down in about a year. It is rather unsightly and if I get the energy, after spreading it around, I'll cover the wool up with hay mulch. 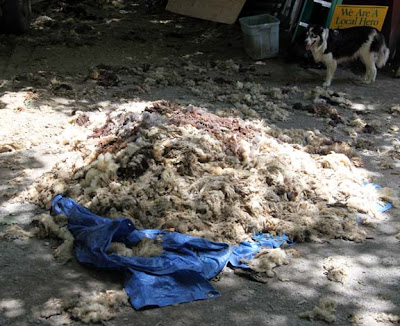 It was a very long day. You can't imagine how dirty I was after lifting and sorting wool all day long. I couldn't wait to hop in the shower at the end of the day. It is over for another year. We have found a buyer for the wool who is going to use it for her blanket business. The income from the wool is not enough to cover the cost of the shearing but it helps. I am not at a point in my life right now to want to get the wool custom processed and market it myself. Maybe someday but not this year. I have to remain realistic with how many hours in the day there are and remember what all I have on my current plate! You can watch videos from last year's shearing here.
at July 10, 2012

You'll just have to teach Kate to fetch and sort the odd "bits"! ;-D

Anyway, Job well done to your Shearers! And You Guys!

i loved your sheep shearing story! thanks for sharing!

Wow, what a day. You are amazing! I'll bet everyone lost a few pounds from the heat!

Wow, what a day. You are amazing! I'll bet everyone lost a few pounds from the heat!

This is a day in your life that really appeals to me. Great story and great read. Really enjoyed it. I just think Kate is beautiful and I am so glad she got her exercise! I couldn't pick up the video of last year, probably my old computer. Have a great day.

My grandparents had a sheep ranch in Texas and one of my most vivid memories from my childhood is standing down in the wool bags to stomp it down and slowly rising to the top as the bag got full. My legs felt greasy for days after from all of the lanolin. Thanks for bringing back such a great memory.

What an interesting post! It's so cool to learn about life on a sheep farm. Thank you!

Terrific post! I've had the pleasure of working with Gwen Hinman at sheep shearings (I'm a handpsinner). I've met Kevin Ford but never worked with him - he's fine doing it all by himself. Aren't the shearers something? So much of their works is finesse. They "work smarter" (as well as "harder") than other people or their bodies won't take the strain. Plus, there's no getting around the fact that animals are stronger than we are, esp if they're frightened, angry, or it's mating season. A shearer's authoritative touch is their best tool, I believe.

When I saw The Farmer at the Amherst Farmer's Market week before lsat, I wanted to ask him what had been done with the clip. Now I know.

Is yours an unusually large flock for New England?

Everyone did a great job. Cold drinks all around.

I, too, love these day-in-the-life stories. You do such a great job of setting the scene and making us feel a part of the action. Thank you.

While I don't comment too often I read your blog regularly and always enjoy it but I was really looking forward to this post. There is something about shearing that is so fascinating, for those of us not doing it of course! Thanks for sharing real life with your readers.