Hexagon Update, Remembrance, + A Video How To on How I Seam the Crocheted Hexagons into a Blanket

When I began my Hexagon Crochet Afghan, I thought it would take me a couple years to finish. I have surprised myself. It is rolling along - thanks to all the sports watching during the Olympics. And to the Oscars. I'm deep into the sewing together phase of the project now.

The afghan has gotten mighty big. It is a bit unwieldy to handle and it is tricky to see how and where to attach new pieces. I moved the furniture in the living room to the walls and I've got a big open space on the floor to check on my progress. During the Oscars the other night, I sewed and sewed and sewed. And then I had to rip a bit. I couldn't figure out why pieces weren't fitting correctly. It was looking a bit wonky. 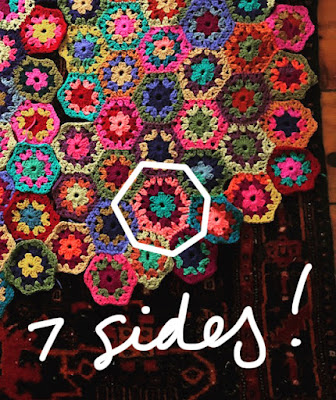 And then I discovered it - one of the hexagons was 7 sided - a heptagon. It wasn't  6 sided at all and it was throwing things off. Rip rip rip and re-sew. It is going better now.

And here I thought I might finish it during the Oscars. Not a prayer. As it is now, it will take several more nights of sewing.

I haven't made a project like this in a long time. Lately the things I have been making have been projects that don't take days and days and days and evenings (unless you count my book which took 1 1/2 years). They have been pieces of pottery or painted walls or tea towels or ...... This has felt like a marathon. It is a bit addicting and I am thinking of starting another afghan. I seem to have caught the crochet bug. It really is super portable and playing with the colors is such fun.

As I have been crocheting in fits and starts all over creation - at the Saturday Farmers Market (one more week for me - it is at the Hadley Mall just outside Target), taking Julia to the doctor and in the evenings, I've thought back to my grandma Frieda. She is the person who taught me to crochet when I was young. I am trying to remember how old I was but for the life of me, I cannot figure it out. I do remember that Gram was always crocheting or quilting or baking or cooking or cleaning or gardening, arranging her dried flowers or making something.

The last big project of her life was making every single one of her grandchildren a crocheted afghan. My Mom procured the pure wool and she made 8 zigzag afghans - one for my 4 sisters and me and for my 3 Nicholas cousins.

(BTW - Kim Werker has a new Zigzag Crochet Class just available on Craftsy. She is giving away 3 classes for FREE - check it out here to sign up to win.)

Gram was a huge part of our lives - how lucky was I? Gram frequently came to our house and babysat for us. We frequently were dropped off at her house. She lived on Conger Street in a 4 square house she and her husband built in 1927. She was a composter before it was cool (for her - it was just right and what you did). She grew all kinds of flowers and veggies. There too she was before her time - she mixed the veggie plants in with her gorgeous roses and flowers. Behind her garage, she planted lots of vegetables. One of my favorite stories from Gram was about when the circus came to town. (Yes - that really did happen in Dover.) The big thing with all the German immigrants was not the circus - it was when the circus was leaving town. They would all be waiting for the elephants to leave and would be there with their buckets to pick up the elephant poop. I can just picture it.

One of my strongest memories of Gram is popping in to visit her on a Sunday evening. She would be sitting in her chair crocheting and watching Masterpiece Theatre. If you went to visit her on a Sunday, you could not talk to her until "her show" was over. I realize now that I have followed in her footsteps - don't bother me until Victoria is over. When I was little, I didn't really "get the drama" of those shows but I sure do now.

On Gram's couch, there was massive green afghan made in wool. It had color blocks of some tan and another green - at least that is how I remember it. On it, there were crocheted flowers and leaves applied. It always looked so beautiful and untouchable to me.  I couldn't believe that someone had had the patience to make such a huge textile by hand with a hook and yarn. I don't know if anyone ever slept under it - it was more of a showpiece in my eyes. Perhaps it was a subliminal piece of work and history that inspired the crocheted flowers I made and included in my floral knit and crochet pattern - Olympia's Knit and Crochet Felted Flowers.

When Gram was in the nursing home at the end of her life, we would visit her. She didn't know us and really couldn't communicate. I found it so incredibly sad to see her like that. I try to remember her as I described above. The one thing I do remember from her days in the nursing home is she would hold the hem of her sheets and she would work the edge like she was crocheting. She couldn't communicate but she still had that motion in her fingers.

Last week, I made a little video that I have posted to YouTube. It is a little long -- 11 minutes - sorry. In it I talk about how I choose which color hexie to put next to another. I also demo my method for sewing the hexies together. I've posted it at the bottom of this post or you can see it on YouTube here.

If you want to see a quicker video - check out this one I posted on Instagram.

While you are on YouTube - do me a favor - sign up to follow my channel. I am trying to build up my following there and it would help me out. Thanks! The more followers I get, the more apt I am to make more videos.

Feel free to ask questions if you have any while watching and I will try to answer them in the comments or in a future post or video.
at March 07, 2018

Your afghan is looking beautiful even with the "odd" block 😊 And what endearing memories of Grams. I have heard of others chasing elephant poo too. Can you imagine?!

I know. No more elephant poo. But here we have plenty of sheep and chicken poo for our gardens. Thx for the message.

Lovely memories of your Grandma and all her crochet. My grandmother was a knitter and I kept a little waistcoat/cardi that she made. I've kept one of my mother's hand knitted cardigans, and one of her cousin's too. Their stitches were SO even and they must have used tiny needles as the stitches are so small. My mother taught me to crochet and although she could crochet, knitting was her 'thing'. She just handed me a ball of wool and a hook, said put a look in the end and see what you can do! Then after I'd got the hang of making chains, she showed me doubles and trebles and the rest, as they say, is history! Your hexi blanket is beautiful - those colours .... WOW! Great video too - well done, they're not so easy, are they! Ax

I honestly don't remember when I learned to crochet... Likely around 7 or 8..? Did an afghan when I was around 10 that I actually sold! But I was also doing a lot of other needlework as well back then. Loved doing corking and needlepoint and bead-weaving... But, by 12 I went back to doing crochet more. That's when I first began the "CASSANDRA PROJECT"... What started as a mass of tangled SEWING THREAD, gone through a couple of incarnations, and travelled the World, is currently a Queen-size-bed sized ONE-piece SPREAD! Still UNfinished... Actually, I haven't had a chance to get back to it in years... I'm 60+ now, so this is pretty much my "legacy" piece. One of these days I'll get around to photographing it. Weighs a ton! But I still collect thread for it... [2 strands chained, then Single-stitched!] - LOTS of COLOUR!
:-D

Just beautiful! I definatley want to try my very rusty crochet skills on a hex blanket. And... Yea, Grandmas!!!