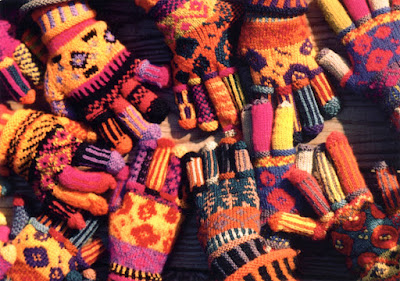 
Number 3 from the World Knits Collection are my Outlandishly Happy Gloves.
Back in 1992, I had never knit a pair of gloves before. Mittens - yes - lots of them. Gloves - no. I had always been scared off by all the fingers. After making the pair of Andean inspired Eclectic Ethnic Dolls, I felt like I could attempt 10 fingers on a pair of gloves. I had no idea how to size the fingers. I found a book in my library from the early 80's by Belle Myers called Knitting Know-How. There was a rough plan for gloves. I cast on and made myself a pair. I charted out a flower motif and planned to embroider details on the Fair Isle design. You can barely see one of my gloves on the lower right of the photo.

I found several knitters who would do their very own version. For the photo, we grabbed a whole bunch of people and laid them on the ground in a circle. The photographer stood over them and directed the hands which way to move. It was quite a sight.

These gloves have totally stood the test of time. Here is a second pair that I made (my first pair somehow sadly disappeared along with all of my projects from the World Knits Collection). As you can see - they were well worn and loved. I have had to reknit the fingers a few times with other colors of yarn. 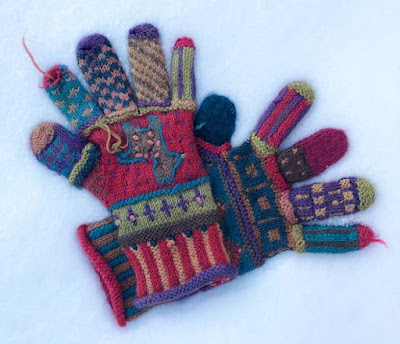 I hope you will give them a go - glove novice or not. They are a very fun knit and won’t take you as long as you think. Maybe you have a pair that you knit long ago. I invite you to add them to the Ravelry page that is now up.


Available on my website here
and on Ravelry here

If you want to keep the pattern in your Ravelry Pattern Library, make sure you order through the Kristin Nicholas Ravelry Store (not my website).
at January 25, 2020

Kristin, I am so thrilled to see these patterns available! I bought your book, Kristin Knits, when it came out in 2007 and the first thing I made was a pair of Fingerless Flower Mitts in the Julia yarn and same colors as pattern. I had no idea I would love these colors so much!! You have introduced me to new color choices, color patterns and techniques.

Time passes, life happens, and I have knit but not these colorful patterns. I'm looking forward to getting back to it (needle felting the Zip It bags!).

I have enjoyed the blog and all your art, and of course the sheep. I have pieces of your pottery. Thank you Kristin for all of it. You brighten my world and give much joy! All the best to you.

Oops, bags aren't needle felted! And I intend to do regular felting...that just slipped out :)

Oh thank you so much Annie! You made my day. Working in solitude has it’s good and bad points so hearing my book has helped you learn to appreciate some new colors really makes me feel great. Thanks so much.
Kristin

Lovely pattern - just the sort of gloves I need in England's chilly northeast! So I've downloaded the pattern via Ravelry remembering I had problems buying direct from you last time because of international VAT charges. Downloaded via Ravelry no probs - now to get knitting! Katherine

Thanks Katherine! Can’t wait to see what you do with it. As for the pattern sales - it doesn’t matter to me where people buy. Ravelry is very convenient and lots of people buy there but some people don’t want to get involved with such a big site. I have them on my website as a convenience for people. Ravelry takes care of VAT which my website doesn’t do. So thanks so much.