We had a busy Monday. The adult sheep (with a few recently born lambs) were to move to a pasture down in town (or as they say here "downstreet"). I was skeptical, to say the least. Down the Hill. People. Dogs. Fences. Whatever, I don't make THOSE decisions about these things. Go with it Kristin. Show up at 9 a.m. Help out. OK. 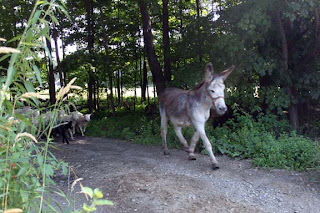 The sheep are close behind. 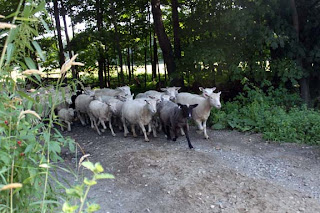 This is the first time they have ever gone down this hill. Sheep are creatures of habit. Their natural inclination would be to turn right. They needed to turn left. We strung a roll of electronet fence across the road, hoping no cars or trucks would come flying down. Speed limit? I don't think they know it exists. Luckily, it worked out okay. The sheep turned left and followed the others. No vehicles appeared. 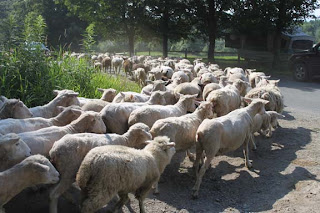 The friends we enlisted owned 4 wheelers. They were awesome (friends and 4 wheelers). Secretly, I want one of these. The Farmer would never agree. Maybe when he is a decade older and his knees and hips really start to ache he will cave. We shall see..... 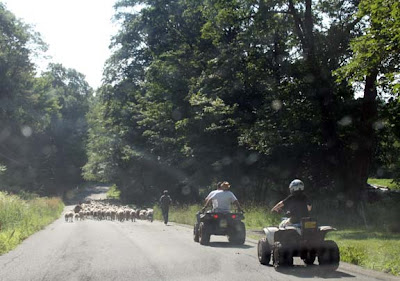 The sheep only had to travel on the paved road for about 1/4 mile downhill. Then we moved them into the woods to travel some woodroads. As a girl from NJ, I had never heard of a "woodroad." Now, I am quite familiar with the term and the thing. It's a wide path that is dirt and travels through woods. Someone actually logs in the woods and brings the wood out on the road - hence "woodroad." Must check to see if it is one word or two! 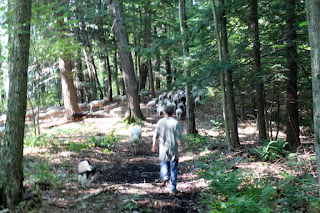 There was an awesome clearing which our longtime neighbors The Pratts call "The Air Field." The sheep couldn't resist the beautiful green grass. 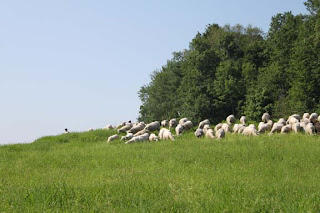 Enter a 4 wheeler. John looked like he had done this before. The sheep moved off the hill, reacting just as if he were a barking sheep dog. But as you can see, there is a sheep dog (Phoebe) right behind them. 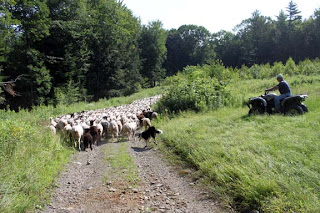 Back into the woods for a further adventure. 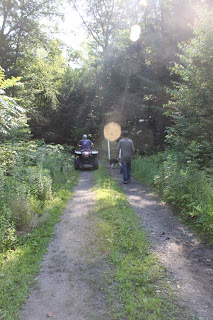 It was too dark to capture anything. In fact, the blurry sheep photo looks as if I remember it all. Crazy running sheep. People and 4 wheelers following. 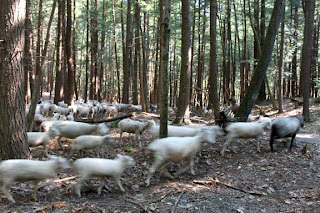 After a few wrong turns (onto various "woodroads"), we got them down the hill and out into the clearing. Almost there. 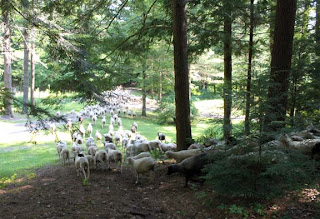 Another false stop at a different grassy field. Jeremy the llama is pulling up the rear. 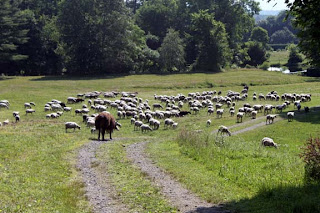 There's Bill Pratt. He's a cattle man but he had a great time chasing the sheep too. Old Border Collie Phoebe keeping everyone in check. That's my girl. 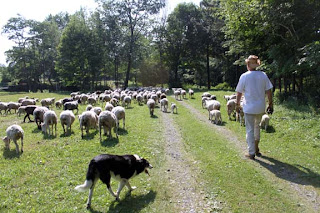 The last bit was crossing a stream. We pushed them forward so they didn't have a chance to turn around. Some went over the bridge.... 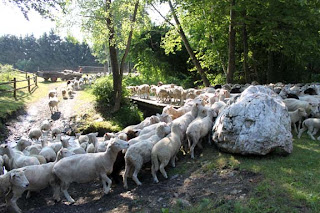 Some went through the stream. 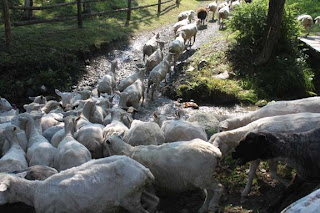 Oh man, I feel like I am living the "Sweetgrass" life. Watch it if you haven't. 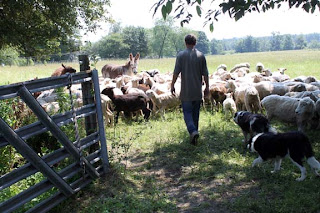 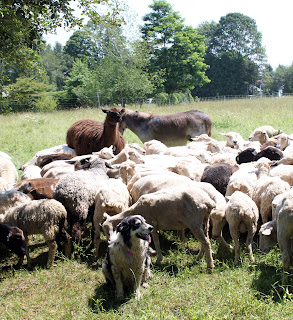 When we were wrangling up some help, our neighbor David asked how long it would take. "Anywhere from 5 minutes to an hour." It took exactly an hour to move them down the road to their new pasture. It was a fast and furious trip. They are happy grazing this 9 acre field courtesy of our friends The Pratts. They'll probably be there for about a week and then we'll have to move them back up the hill.
If you go by Kringle Candle towards the weekend, go down Barton Road and take a look on the right. There they will be. I'm really hoping the fences hold them in because it could be sheer havoc if they get out! They are basically in the midst of a suburban neighborhood. Wonder how everyone is sleeping at night? No complaints yet. Hey, Julia and I are going out of town for a family event. The Farmer gets to stay home. I'm sure there will be stories.
at July 14, 2011

I always love the sheep pix, but these are AWESOME! jaunty and free. A great start to my day.

I love this story. I relly liked the pics of the sheep with their fleeces still on. You know those where the naughty sheep who where saying "You can't catch us, hahahahaha! If you want this fleece you're going to have to work for it." during shearing time.
Great story, great pics.

I love the shot of Eeyore. He looks so sweet and proud to be the responsible leader of the flock.
Keeping fingers crossed that everyone behaves while you and Julia are out of town.(meaning the sheep, not your wonderful husband!) Have a lovely time!

I'm with you...I covet a four-wheeler (better yet, a Gator!), but my resident farmer-man will have none of it. This was a great episode in the "Adventures of Kristin of Leyden Glen Farm"!

Wow. SO much work to move these sheep, but it looks like so much fun too. :)

I love the last piclture with Pheobe sitting, maybe a little tired, but looking happy and proud. "A job well done, Miss Phoebe"!
Kristin, this post is so wonderful! I feel just as if I had read a good book!
Keep these photos and write a book!

Looks like it was alot of fun had by all. I think it's neat owning sheep.

Love that Eeyore and Jeremy and Phoebe. It's just amazing how animals can be trained to do things for their people and other animals. Keep those amazing pics coming!!

Always interesting to hear about the keeping of the sheep. In BC we call "woodroads" "skidtrails" because the logs are taken out with skidders.

I saw Sweetgrass this past spring - DH and I met while living in Montana, even though we're both from New England - and that was definitely in my mind as you described going through the woods! Glad it went smoothly - thanks for sharing!