My Trip to Google's Offices in Cambridge

Things have been busy since the last time I posted here. Julia and I had a fun adventure to the Google offices in Cambridge, MA where I presented a talk about my new book Crafting A Patterned Home. I don't have any photos from the event but I do know that the talk will be available soon on the Talks at Google Youtube channel.

While I was preparing my talk, I took the time to explore their video channel. There were not any talks that were presented that were similar to mine that I could find. I did my best to get an idea of how they would be filmed and what the audience would be interested in. They host and tape these talks at their offices all over the world. Their Youtube channel has over 770,000 subscribers and there are My host David was hoping for an audience of 5 to 15 people. I think we had about 20 which was great.

I will admit that this was the first time that I have spoken to an audience of primarily men. Most times when I speak there are almost all women listening. I did my best to feel comfortable with this difference. Mostly I was hoping someone would be interested in what I had to share. Speaking at Google gave me an opportunity to get my ideas of design and the handmade out to a totally new demographic. I had some very enthusiastic and sweet listeners that came up after to pick up a book.

Google tapes all the talks and there was an awesome videographer named Tim who took care of all the technical issues. What a joy to get to a place and not be worried about the technology piece of the puzzle. They had all the cables and power cords I needed for my Mac and my Powerpoint loaded onto the screens without a hitch. I know it seems funny to worry about something like this but when I was in Minnesota speaking at The Textile Center several years ago I had a full crowd waiting to hear me speak and we couldn't get the audio visual piece to work. Thank goodness for my friend Robin's husband Daniel who saved that day by bringing his computer in and getting that presentation to play.

This is an illustration I did to begin my Powerpoint Presentation. I wrote the word Google on my iPad Pro and then added bits of pattern design in separate layers. Then I brought the files into Illustrator and tweaked them. I used Google's signature colors for the decoration.

After the talk, Julia and I had lunch with my host David in one of the Google cafeterias (I think there are four). That was super cool. Very good food and so many selections. They even had lamb that day which I had to try! After lunch, Julia and I got a tour of the different floors. This was a real treat for me. Each floor of the building which is just above the Kendall Square T stop is decorated in a different theme based on the T Stations in the Boston area. The offices were incredibly well done which shouldn't be a surprise. There were lots of comfy chairs for people to escape from their cubicles. There were many fun meeting spots with creative decoration and several places to pick up coffee or some kind of beverage. Infused waters were quite popular. (Now I am making them.) The fabrics they used were varied and I noticed a lot of woven wool and some gorgeous wool felt used in the design of different areas. (Perhaps the wool felt came from this company which specializes in wool felt for architecture and design.) There were lots of innovative design treatments including plywood that was cut out in different patterns. There was so much to look at and absorb - it was really a very cool experience for someone like me who lives and breathes textiles, design, color, and interiors.

I found these photos on-line on the blog Office Snapshots of the Google Cambridge offices and thought it would be fun to share them here with you all. The offices were designed by the Nelson Firm which is a global design and architecture firm. Google employs 1,400 people in this office space which is close to MIT and just above the Kendall T public subway stop. The offices are in excess of 300,000 square feet and they were done in 2016. I learned that they are still expanding that office so I assume there will be lots more fun and innovative design happening there. What a fun job that would be for an up and coming interior designer - working on the interiors for Google. 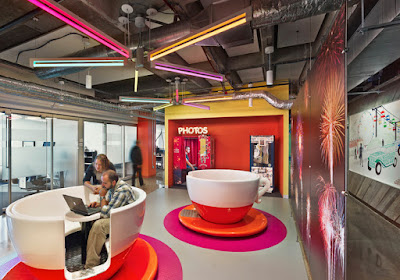 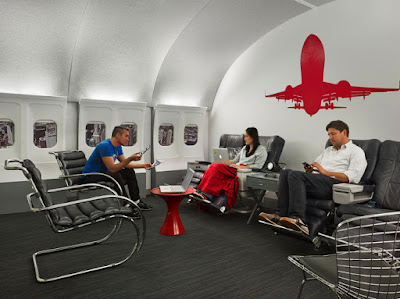 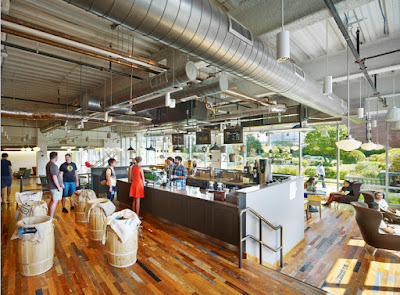 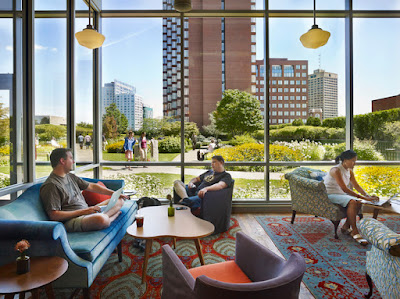 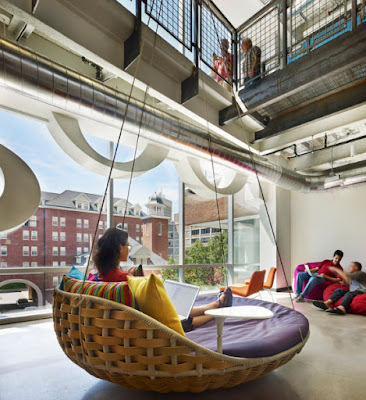 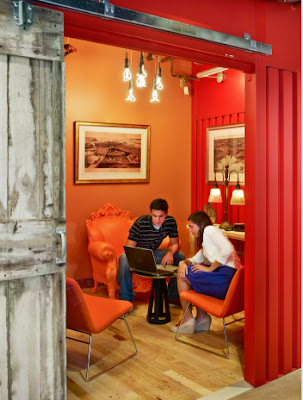 Thanks so much to David for inviting me and putting it all together. And thanks to Stephanie who suggested the talk. Thanks to all of the Googlers who came out and listened - it was lovely to meet you all. This Google experience has got to be one of the high points of my creative life. I'm still wondering how I got there.

I will let you all know when the talk goes on their Youtube channel.

In the meantime, here are some of the Talks at Google that I listened to before I spoke. You may find some of them interesting too.  Each is about 45 minutes long and there are often audience questions at the end. They are different than 18 minute Ted Talks and take more time to watch but if you are knitting or stitching or cooking, you can learn something really interesting while working on a project.

Great pics! If only all of our Work "environments" were so COMFY looking! - GOOGLE: the "Love-Child" of IKEA and DISNEY... Who knew?
;->

Very cool to give a talk in such an interesting work environment! I'm glad Julia was there to experience it with you too! Congrats! Love your book - I got it from my library but may need my own copy for continued imspiration.