On Day Two of our Creative Retreat last weekend, I taught Fabric Stamping and Printing. It was a smaller class than Day One but so much was accomplished. Unfortunately I didn't remember to take as many photos as Day One. Oh well.

Stephanie has been here several times. She designed a pillow top that she will embroider to match the pillow top she printed and embroidered last year. Here is her foam stamp and the finished pillow top. She used a cork to make the circles. 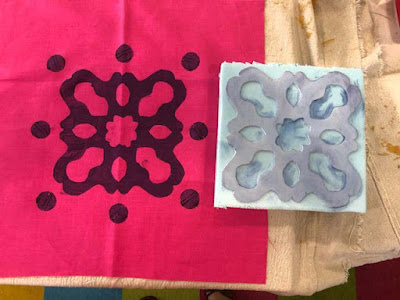 Here is a photo of Stephanie's stamped and embroidered pillow from last year and the new pillow top. Stephanie travels a lot so she is finding the embroidery a great thing to take to do on planes and public transport. (I'm with you on that Stephanie!) 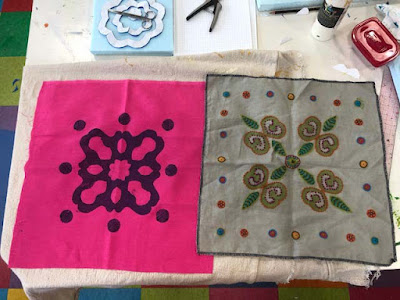 I don't have a photo of Jan's bag she made - oops.

Here is a project Cynthia has been working on for a couple of years. She is printing on navy and white ticking. I love how the shapes play together and how the colors overlap. I think this would make awesome fabric for upholstery (but that would take more time than I know Cynthia has). 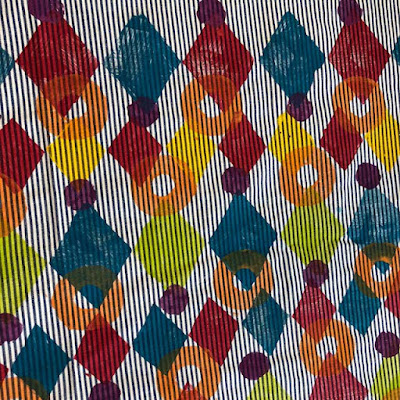 Just after lunch I showed everyone how to take a photo of a stamped motif and bring it into Photoshop. In PS, I tweak it a bit and saved it. Then I brought the image into the Spoonflower website and showed everyone how to use the program. I know there are many people who are very adept at Spoonflower but there are also folks who would like to try it and don't know how to start.

Here is the photo of my stamp. 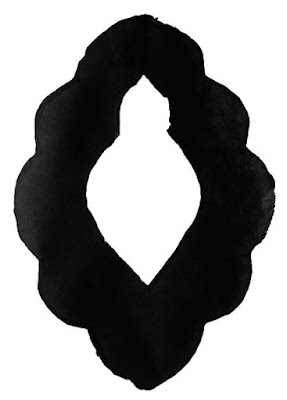 Here is the page from Spoonflower where I demo-ed how the site works. 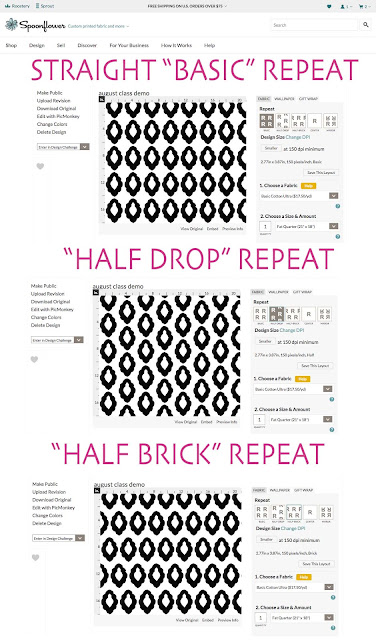 Later in the afternoon, we went back down to the studio and Stephanie and Jan kept working. Jan continued work on her painted tabletop. Stephanie had brought a very cool project to work on.....

Stephanie's husband David had use of a laser cutter at his office. Stephanie asked him to cut out a series of different size ovals and circles out of a piece of adhesive foam. She brought both the circles and the piece of foam from which they were cut. We were all so excited about the possibilities of a laser cutter. I have never had the use of one and perhaps one of my readers might be able to give me a headsup to a scaled down home version vs the $5,000 model. Julia used a laser cutter and engraver in her woodshop class a couple of years ago and I was jealous.

Stephanie mounted the circles and ovals onto foam. She used a brayer and block printing inks to apply the ink. 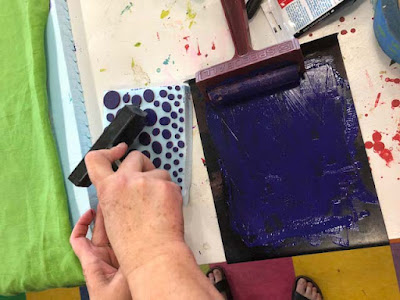 Here is her block and a piece of fabric which is printed with 4 of the blocks. 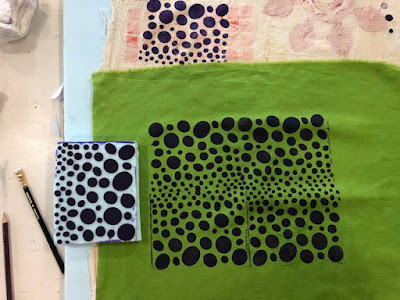 Next she mounted the sheet of foam that the circles were cut from with the laser cutter. She inked that block and printed on the same green linen and on a canvas bag. 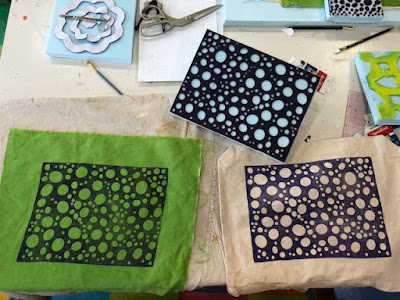 Imagine the possibilites! I was so excited about her project. Maybe the laser cutters will come down in price so that individual artists can use them. Maybe they already have. For any of you familiar with the Cricut machine - does it cut adhesive backed foam that is about 1/4" thick?

As with each Creative Retreat* - we had a bit of a hiccup when the plumbing pipe from the kitchen clogged and the basement sink filled up. Ooooppps. This has happened to the sink one other time in the 20 years we have lived in our farmhouse. Of course it had to happen when I had guests! Cynthia tried to plunge it out. No luck. I put some high power plumbing green blaster down it. Still no luck. Stephanie called her hubby David who was staying in the area with her. He went to Home Depot, bought a snake and was a real hero. After lots of work, 20 feet of the snake and a change of clothes, David cleared the drain. Thank you David. I do need to call the plumber who cleared it once before so I don't have the same problem this winter. I guess the clogged pipe will be a memory for everyone!
*In past retreats, Nessie, the Border Collie, got skunked the night before and the toilet clogged on the very first retreat. Country living!

Thanks to everyone who came to the second Creative Retreat of 2018. It was such a great weekend and I am still reeling from all the conversations and ideas that were floated around. I hope some more of you might be able to come to a future Creative Retreat here at our farm in western Massachusetts.
at August 19, 2018

Email ThisBlogThis!Share to TwitterShare to FacebookShare to Pinterest
Labels: "Get Stitched on the Farm" Classes, art, creativity, painting

Here is a link to the Cricut company's page about cutting foam.
https://help.cricut.com/help/craft-foam-instructions

I am a teacher/librarian with a pretty limited personal budget. I found an very early generation Cricut machine at my local Goodwill for 9.99.
I do see that they are popping up on the secondary market and they have their own page on Facebook Market in local areas for cartridge/supply sales.
good luck
Mary Kate

Oh wow Mary Kate - thank you so much. I will check it out. Used machine sounds good. It looks like you got a very good deal! Have you used it much?
Kristin

Kristin
I have used it lots this year for school prep. Makes beautiful letters for signage for library and bulletin boards.
Absolutely necessary to buy a basic set of Cricut tools at Michael's or Joann's. I used a coupon and purchased them for about $10.
The only part of the directions that were unclear is what they call "Shadow" is really a base layer and you cut out the other layers and gue them over it to create a three dimensional effect.
I called the company and they were very responsive and helpful. At the used price, I suspect and that you and julia would really enjoy it.
Mary Kate