Coming to the End + Square One

Summer is starting to feel like early autumn. My garden is starting to look a little tired with plants falling all over the place. We have had a lot of rain -- hence the plants all over the ground -- but it looks like it is going to be a beautiful fall weekend. I will be at the Amherst Farmers Market selling our farm raised lamb and my linen/cotton tea towels. 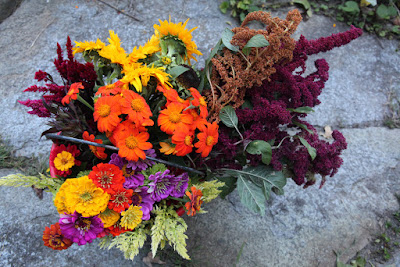 The critters are starting to eat the mature sunflower heads. I'm still picking lots of flowers for bouquets and to keep the flowers coming. I have learned that the more you pick - especially zinnias -- the more blooms that keep coming. And so I pick and pick and pick. 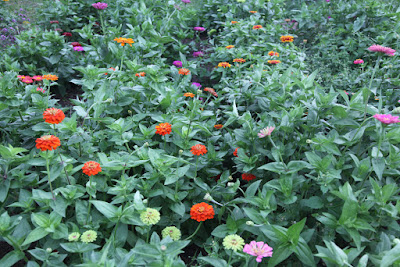 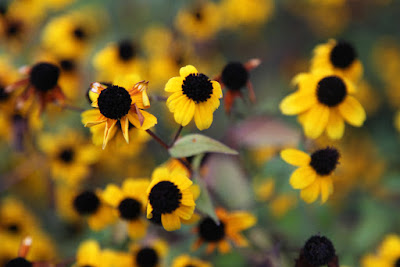 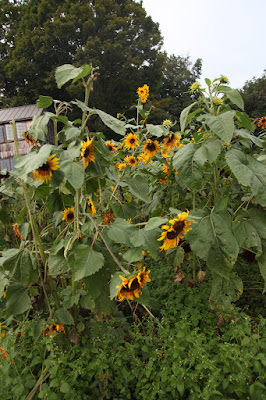 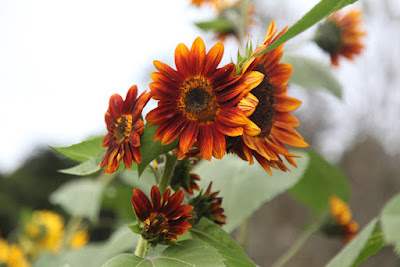 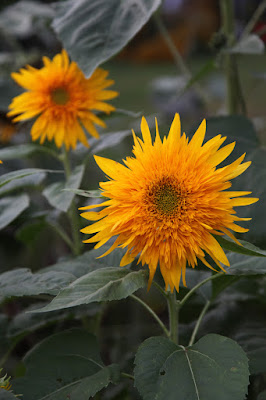 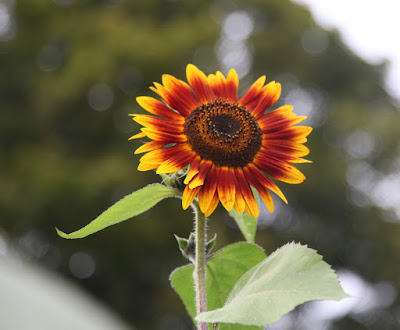 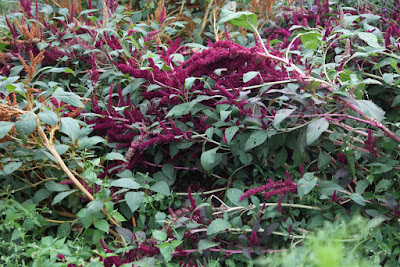 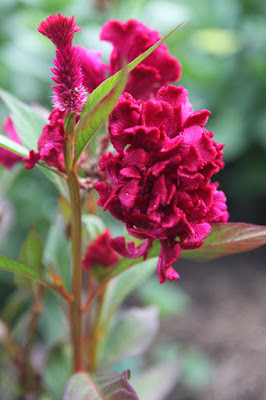 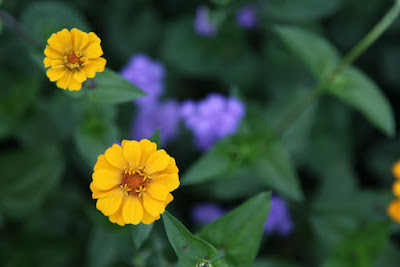 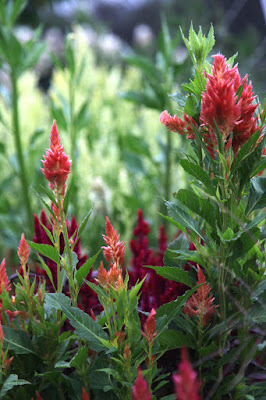 Last week, The Farmer had to have more surgery to repair a torn hip muscle due to a fall after his hip replacement surgery. This is a set back we/he/I really didn't need but he is fortunate it could be repaired. We aren't exactly back to total Square One and hopefully it won't take as long to recover - considering he wasn't even recovered from the first surgery in mid-July. It was lucky that I had called my third retreat off because this surgery came up very quickly and would have been the day before that Retreat started. He was hoping to have his other hip replaced this year but I don't think that will happen with winter closing in and lambing in January. Looks like another year of surgery and fewer animals. It makes me think about a large percentage of the farmers who have fed people over the years who are growing older and less nimble. Are there enough young farmers interested in keeping livestock and growing crops to feed the population that continues to move to the cities and suburbs. Do those people who shop at grocery stores ever really think about the person and people behind the veggies (fresh, canned, and frozen) and meat wrapped in plastic wrap placed on styrofoam trays? What if it all went away? What would they do? 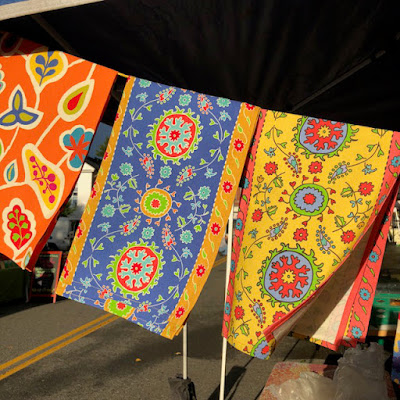 I have been cutting, ironing, sewing, and ironing lots of my linen/cotton tea towels for upcoming holiday sales. It is a bit mindless and somewhat boring but I have been enjoying watching the PBS series The Durrell's on Amazon Prime. Season 3 starts this weekend and I hope to get up to speed so I can enjoy it in real time. This is the third time I have watched a version of the "Our Family and Other Animals" by Gerald Durrell. There was a series in the 80's here, then another  BBC tv show from 2005 here,

Back in the 80's (I think) Mark and I went to the Isle of Jersey off the coast of the UK. We stumbled upon the Jersey Zoo which was founded by Gerald Durrell, the author of the book Our Family and Other Animals. It was a curious place which we knew nothing of. So cool to think that was my introduction to Gerald's books. If you ever get to Jersey, visit the Zoo. More information here on the Zoo and here on the Durrell Wildlife and Conservation Trust. Once I got back to the States I found old copies of Durrell's books and read all three which they call the Corfu Trilogy. I think I may read them again..... if I can find the time.

As an author, I really do marvel at the longevity of these Gerald Durrell books - especially My Family and Other Animals which has been continuously in print since 1956. The stories are simple and fun and chaotic - about family and animals and people. I wonder if Gerald Durrell ever got tired of talking about the books because he had moved on. But then to have the good fortune to have written a book that lasted for decades and decades and gave him the ability to build and fund his own zoo. That is really remarkable.

Speaking of animals, we have kittens. Our calico cat Fiona has a gorgeous litter of 6 babies - all of them different colors. We are having a fun time socializing them and figuring out all their little personalities. Just this week they have become lap cats and each evening you can find the three of us watching tv covered in kittens. What a lovely way to spend an evening. Soon they won't be as interested in us anymore as they will be more into exploring their legs and batting each other around but for this week, we are in kitten heaven. 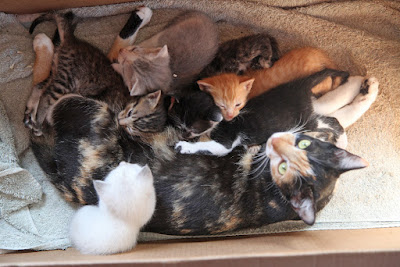 I hope you all are enjoying the end of summer. It sure has flown by. Looking forward to the autumn colors but not so much to the cold. We are short of wood this year and Mark can't do anything to help out that situation. Fingers crossed I can find some so I can keep the woodstove going for those cold winter evenings.
at September 27, 2018

Wishing Mark speedy and strong healing and that the wood fairy visits you with bountiful cords. I bet many of us would contribute if we lived closer. Best to you all.
p.s hope you're selling flowers at the market! I know I'd buy some for my house. xo.

Looks like Mama Cat had quite a party! If the weather does turn colder, your kitten lap party may last longer than you think. In my world, the same cat who gives me that "touch me and bleed" look in July want to be my best friend in the winter. Yes, I know I'm a hot water bottle. I sincerely hope your DH has a successful and speedy recovery for his sake and yours. Looking at all your photos, I'm always amazed at how hard you work and how much you get done.

Such beauty you get to work with! God will provide.

Blessings on you as you are trying to hold it all together! I pray someone will step up and supply you with firewood for the winter. Also pray for rapid healing for your husband. Beautiful post! Thank You for your inspiration!

I am curious about the flower in the ninth photo from the top. Would you please tell me what flower that is? And is it the same as what is in the photo above it?

The kittens are beautiful; the one in the twelve o'clock position looks like a perfect mix of gray and orange, at least in that photo.

It is some kind of celosia. No idea what though. I bought some 6 packs on sale for $1 and put them in spaces in the garden where things didn’t make it. There is a place at corner of 5+10 in Northfield that sells annuals cheap after July 4 and they sometimes have some nice odd things.

I have been reading your email posts for years. I love how you share so much of both the joys and pains that comes with farming. I look forward to your postings and between them I think about how you, your daughter and your husband are faring.


I actually caught myself the other day telling someone about 'my friend, Kristin, who lives on a sheep farm', even though we never met in person. I am absolutely looking forward to buying some of those tea towels. If there is any chance of pre ordering them, let me know.

Oh, Kristin, we do think of the farmers! Our local co-op (Oryana in Traverse City MI) highlights the local farmers with bios and photos posted here and there, plus we have a Taste the Local Difference organization and a published local food guide. There are even farm tours occasionally. We are a foodie paradise, and many local restaurants highlight local foods on their menus. Have hope!!!

And have hope about those darn hips!!! We will keep good thoughts going for the dh!
Linnea

We go to the farmer’s market or try to buy local at the grocery, so yes, we do think of the farmer. I’m so sorry Mark is going through this.