I'm not sure if you all have heard this news - rather old by now...... But Craftsy - the on-line teaching website where I teach an on-line Crewel Embroidery Class called Stitch It With Wool was sold to NBCUniversal for 230 Million $ in 2017. That's a big chunk of change. There has been a lot of on-line chatter from the many different teachers who have classes on the on-line platform. I know that many teachers made a huge portion of their income from their on-line classes (from what I surmise). My class has never been really popular - just a steady seller. The Craftsy model has changed a bit (they have gone to a subscription model and a pay for a single class). If you bought a class, you still own it and have access to it. This summer NBCUniversal changed the name of Craftsy to BluPrint and redesigned the website. NBCUniversal is a huge company and I assumed there would be many changes. That is what happens when big companies buy smaller companies. Life moves on for all of us little people.

One cool thing is that NBC is now doing a tv show called Making It. I'm assuming this new show is part of their plan for "craftertainment." The judges of the show are a woman from Etsy and Simon Doonan (of Barney's window decoration fame). It is hosted by Nick Offerman and Amy Poehler. Season One is just done. I watched a few times. Funny story was - I was approached by the producers to interview to be a contestant on the first season a couple summers ago. I wasn't interested in the contest type format and so I said no - much to Julia's disappointment. (She is a huge Amy Poehler fan.) The show was  cute. I picked the winner after watching it a couple times. The guy was super talented.

When I originally taped my Craftsy class Stitch It With Wool, I decided to add a section to my website for crewel embroidery supplies. It isn't a big business but it is a steady one. It is very difficult to find these supplies now as so many needlework stores have disappeared. Crewel embroidery and embroidery seems to be making a bit of a comeback in general. My little store chugs along.

Today I want to introduce to you all 6 new colors of LINEN for Crewel Embroidery. Here they are: 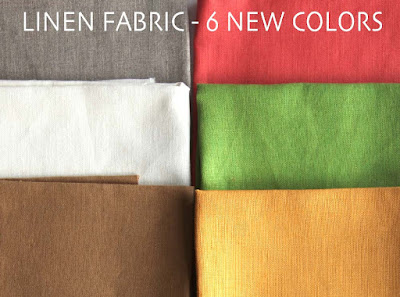 You all are going to pretty amused by the next part...... I have been teaching Crewel Embroidery here at the farm for several years. Each year, I ask the students what color fabric they want to stitch on. One year, Lee said to me - don't you have any neutrals? You see - as you would guess -- my original 10 colors were all COLOR, not neutral.

Here are the original 10 colors: 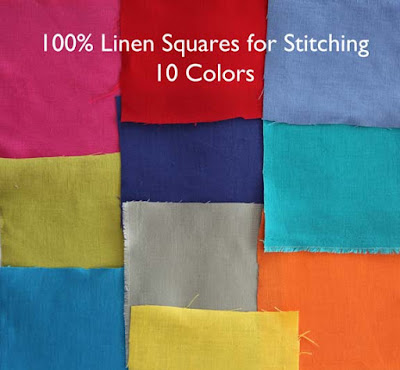 I never even thought to stock off-white, flax, and brown shades of linen. Never occurred to me! So now, by popular demand, I now have FLAX (natural color of linen fiber), OFF-WHITE, and a pretty brown called FAWN.

In addition - I have added a gorgeous CORAL color, a pretty GRASS GREEN, and a stunning SUNFLOWER shade.

Hop on over to my website to order some linen fabric and crewel wool for a embroidery project in your future.

I'll be sharing a new project that I just stitched in an upcoming post.
at September 07, 2018

Personally, I love all those colours! ;-> That coral one is interesting...

yeah, Mom & I have been watching that show. -- We both WANT that BARN! If only for the SPACE! And the floor... I really love that floor motif. However, overall, I'm not really "wow"ed by the show's presentation... The Great British Baking Show it's NOT! - Speaking of the Brits, I think they had a similar crafty show, didn't they..?

Meanwhile, I'm also not big on either judge, especially Simon. And the whole "atmosphere" [don't get me started on the "scripts"!] of the show seems "forced" and over baked. "Forged in Fire" it ain't either!

At the end of the day, I think the REAL "creative"-talent belongs to the SET-DESIGNERS and the "helpers"-crew!! -- BTW, you should have been approached to be a "JUDGE", not as a contestant! You made the correct choice. Although, it is still cool that THEY sought you out in the first place.

Thanks for the info Kristin ~ I had not heard about the changes...
Love your colors!!!!

Great new colors. My crewel work on the hot pink I picked up in August is coming along. I'm loving it.

There is huge money to be made in hand work. There is a woman who started out with an actual store selling everything cross stitch. She then started selling on eBay. From eBay she started selling through her own Facebook selling group. Her name is Cindy Sorley. She is selling $90,000 per MONTH through the Facebook group!