We spend a lot of time moving our sheep around. During the grazing season (April to November) we have different flocks of sheep on different pastures. During breeding season (August to January), we keep certain rams with certain sheep so that we can control the genetics of the babies. All this moving around and sorting of sheep takes up a heck of a lot of time. Some days, things go really smooth and some days we run into disaster after disaster.
This year, we have wintered most of the lambs who were born last year at our farmhouse. These are the sheep in the snowstorm shown on my current banner above. They had no cover and it was not a problem. Everyone seemed healthy and happy and well fed. That is until last weekend when we had buckets and buckets of rain. It torrented. I kept waking up, hearing the rain beat sideways against the bedroom windows. It just kept pounding down, keeping me awake. I knew that in the morning it was going to be a muddy, messy, icy quagmire. That kind of weather is also what we refer to around here as "lamb killing weather." The ewes lamb outdoors and the newborns just can't get dry. They get hypothermic and perish. It isn't pleasant. That's really why I couldn't sleep. I was worrying.
On Tuesday, once it had dried out a teensy bit, we decided to move all the yearlings from our farmhouse pasture to the winter quarters. The rain had washed away some of the snow making this possible. Before this, we couldn't get the truck in.... too much ice and too deep a snow pack. Our friend Terri who has been helping out this lambing season had a few free hours so we enlisted her. Having another hand is so helpful!
Terri met me at our house, we mixed up the milk for the bottle lambs and then we headed to the barn. As we drove down, around, and up one of the many hills here in town, we were greeted by a mesmerizing sight.... a little bit of the forest completely covered with ice. 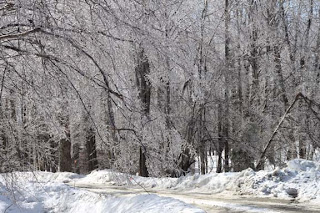 Every branch was covered with a thick layer of ice and they were shimmering like prisms. 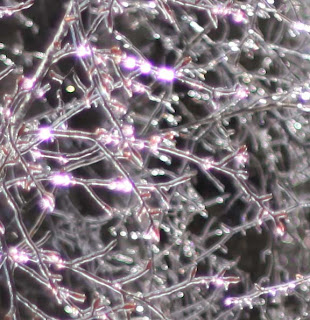 I felt like I was traveling through the land of Dr. Zhivago. This is definitely one of the perks of living where we do and not going to a real office every day. I get to enjoy the incredibly beautiful sights that I would miss if I were rushing off to work, late as usual. 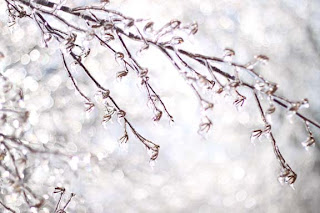 Back to the sheep.... After we finished barn chores, we headed back to the farmhouse to attempt our big job of the day. We knew it could take most of the day to move them. We use a landscape trailer and the biggest challenge is to get the sheep to walk on the trailer. A little grain helps, especially if you have a curious sheep or two who wants a snack. After the first load we knew that the job would take us a week. The sheep didn't want to climb on the trailer.
Our sheep handling thingie was frozen under a lot of ice. The Farmer poured a bunch of salt on the panels hoping it would melt a bit in an hour. It did. Terri and I watched as he chipped away the ice. He can be really strong when he needs to be. I would have just given up and cried but he wailed away at that ice and the "thingie" came free. We corralled the yearlings into an area with the help of Nessie and the "thingie." Things were looking up. Maybe we could complete the job in one day? With the corral in place, we were able to force the sheep onto the trailer. The bucket of sweet grain helps. There's always a "pig" or two who will lead the pack. 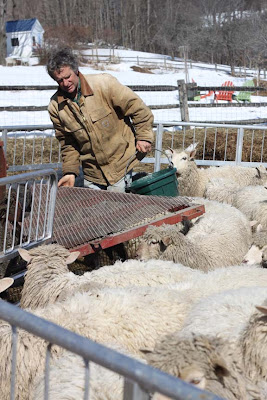 Terri helped us with one load and then she had to go home to bed (she is an nurse who works the night shift!). The two of us continued for the rest of the day loading and moving sheep.
It wasn't a delicate sight. The trailer bumped around, up and out of the pasture. Do you see the gates? The snow and ice pushed them off the hinges. Something else to fix before the sheep come back to this pasture. 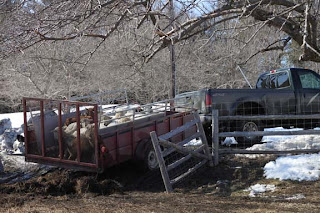 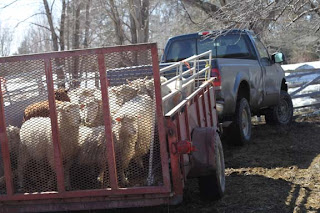 Off they went..... The beautiful blue sky made the whole job a lot easier. Another chore done. 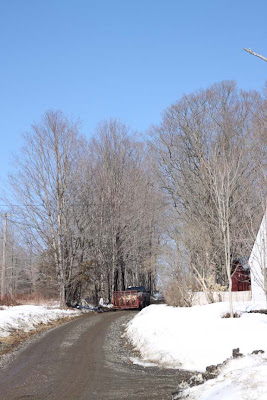 Later in the day, it clouded over. The ice was still covering the trees and it was mighty magical. 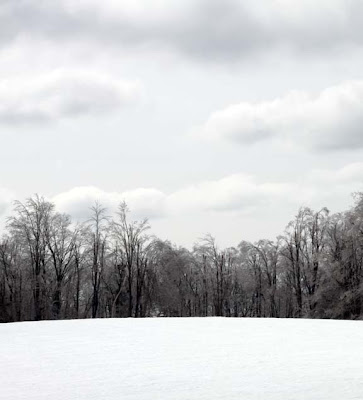 Winter is still here and we are expecting some really nasty weather tonight and tomorrow. At least we have all the yearlings where they can lamb under cover if they have the sense. But these sheep have been outdoors for most of their lives and they really prefer being outdoors. Fingers crossed. 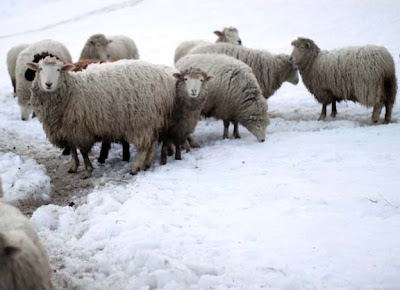 We feel great to have that job over with. Now we're hoping for lots of healthy little lambs from these young ladies.
at March 09, 2011

I don't envy the Ice chopping! I have a hard enough time here IN a city with my driveway ice... I keep wondering if spraying it all with a little cheap "booze" might do the trick..? ;-]

Anyway, take care with that weather coming in! I'm on the north side of it. Already starting to snow... that I can handle, but the follow-up RAIN is going to be a PAIN! - You guys are SAINTS!!

Take it slow and be careful! *HUGS*!

Kristin:
I just wanted you to know I have been following your blog for about a year now, and I am absolutly mesmorized by it... I love the sheep, hearing about all you do with them, the amazing pictures...I just love all of it..
I am not a knitter, but do crochet, quilt do counted cross stitch and just about anything else...Found out a long time ago knitting I was too uncoordinated for LOL....
Martha Reppert @ Marthann's Musings.... I have not posted on my blog in a long time but hope to start up again soon...

Kristin, once again you have painted such an amazing picture of both the beauty and the endlessly hard work of sheep farming. thank you!

those pictures of the icy trees are gorgeous! Thanks for sharing them!