Are you new to keeping chickens? It seems like more and more households are catching hen fever. It's a fun farm-y type activity that can be done in many suburban neighborhoods. I've kept chickens since we bought our first house in Pepperell back in 1988. I remember the thrill of paging through the Murray-MacMurray catalog and choosing the different breeds and colors of birds I would keep. I was so excited when the post office called me very early one morning to tell me I should come and pick up the peeping box of chicks.

Every year since 1988, I have purchased new chicks to replace the layers that had gotten old and unproductive or who had been lost to predators. One year we had a very hungry possum who really did a number on my brood until the night we caught him and The Farmer whacked him on the head with a shovel. That was the end of him. We've lost chickens to hawks, raccoons, foxes, skunks, even our Border Collies. Life and death happen on a farm and I am used to it. I used to be squeamish about dead things. Now I just grab a pair of gloves, pick it up and find a place to bury it or move it to the woods for something else wild to eat.

Keeping chickens isn't hard at all. There are tons of good books out now that are available if you are interested. I try to keep it very simple. I start my chicks off in a cardboard box with some newspaper, shavings, water and chick starter and a clip light to keep them warm. When they start to fly, I move them to a taller wooden box and add an old screen to the top. Once they have feathers, I turn the light off.

Every day they need fresh water and some grain. I add fresh shavings and clean out the newspaper and bottom of box when it starts to get smelly. That's pretty much it. I move them outside to the chicken coop when they are big enough to not get through the wire. Our coop was here when we moved in. It is barely holding together and one day I hope to replace it. I have a chicken run which is about 16 feet by 16 feet and it is totally covered with chicken wire, including the top of it. I've tried to let my hens go "free range" but it doesn't work around here. All I end up doing is feeding the wildlife. 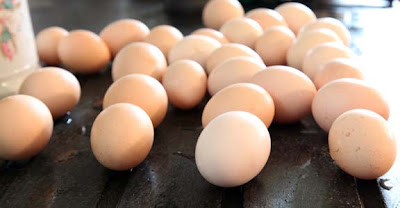 A couple hints that I have learned over the years:
•When you are ready to move your chicks out into a coop with an older flock of birds, do it at night when it is dark. Chickens cannot see well at night and they will not even know that more birds have been added.
•Don't overspend on an expensive coop. Chickens are chickens, not rock stars. Keep it simple in case you don't like the birds and want to get rid of them.
•The term pecking order is true. Sometimes hens will start picking on another hen and peck it to death. Watch out for that because if there is blood on a hen, the other ones will not stop and pretty soon, the one that is being picked on will no longer be alive. It's a cruel world in the chicken coop.
•You don't need a rooster. That said, I always have one or two because I love to listen to the crow every morning at around 4 a.m.
•If said rooster attacks you, get rid of it. It will not become nicer and you really don't need to be fearful when you are collecting eggs.
•Chickens are great composting machines. I feed my chickens everything - from table scraps to garden weeds and fall leaves. The more greens they eat, the orange-r the yolks will be. Some people say not to feed chickens meat but I do. I think that is because they worry about rats and other wildlife. Fact of the matter is, the meat scraps are in the chickens' tummies in about 30 seconds so what is the harm? I also skim all the fats off my soups and stocks and feed them and bacon drippings to the chickens. I'm not sure what it is but the next day, I have a bumper crop of eggs to collect.
•Watch where you put your chicks if you decide to move them outside for some fresh air during the day. One time The Farmer did this and didn't think about the sun moving around in the sky. When he put the out late in the morning, they were in the shade. We came home from work, the sun had rotated and all the chicks were dead from heat stroke. Not a good day.
•If you have livestock, you will have dead stock. Get over it. Stuff happens and you cannot save everything. I heard an amazing story about a woman who took her chicken to the vet because it wasn't feeling well. She spent $1400 on vet bills and the chicken died anyway. A new chicken will cost you about $3. Consider dealing with farm animals that die as your family's chance to learn about life, death, and the cycle of life. It is an important lesson to teach your children and to learn yourself.
•A family of three doesn't need more than 4 chickens. I have 10 hens that are laying right now and I am overwhelmed with eggs. Learn how to cook with eggs and get your family used to eggs for dinner. They are very cheap protein and quick to make and very tasty.
•If you want to be diligent and cull your hens every two years when they become less productive, purchase a different breed (or color) of chicken every year. Last year, I purchased gold Buff Orpingtons. This year I purchased greyish brown Aracaunas. I plan to get rid of all the gold hens after next summer as they will be two years old and not as productive. I don't want to feed them over the winter when laying decreases (unless you trick the hens with fake longer days using lights).

Anyone else have some good chicken keeping hints? Leave them in the comments to share with everyone. If anyone has a favorite chicken-keeping website, post the link in the comments. Have a great day everyone.
at June 13, 2012

Chicken manure makes a great organic fertizizer for your garden, don't use it when it's "hot" though, the high nitrate content will burn your plants when it's fresh, give it some time to season.
Thanks so much for your blog Kristen, I really enjoy it, although it does make me yearn for my farming days. I miss having my own chickens, but I can't see my neighbors putting up with them, so I have to live vicariously.

When I lived in the country, I kept chickens - I called them my two-legged garbage disposals. They came from Murray McMurray too. Now that I live in the city, I am hoping the local laws change so I can have a few in my backyard.

My hints are:
* Lock them up at night - we lost several to an owl that would hang around til dawn, waiting for the chickens to emerge from the coop.
* Fresh eggs are impossible to peel when hard boiled. Let them set out at room temperature for a few days to solve that problem. Don't worry - they won't spoil - the eggs you get in the store are probably 6 weeks old.
* Don't wash eggs until you are ready to use them - they have a natural coating that helps preserve them.

What a great post - thanks. I'm lucky in that the neighbors keep the hens and I just get eggs since I help out when they go away :-)

I've been thinking about chickens for a couple of years now. I'm worried about the old hens. I'm not sure I could kill and butcher them myself, but wouldn't object to donating to someone who would. I just don't know how to find that "someone." Any suggestions?

What great comments everyone! Keep them coming.

For Loony Nuna - Usually I can find any number of people who will take old birds. It is just a matter of talking about it. We have some recent immigrants from eastern Europe who I call whenever I want to pare down my numbers. So getting rid of old birds is pretty easy.

Very interesting! We are thinking of getting chickens next spring. Just have to make work of getting things ready. Thanks for all the wonderful suggestions!

Great musings on chickens Kristen!
I too have chickens and everything you said is true...all the way down to not building a fancy coop. Who knew that chickens created so much DUST!
As for the person who wants to know where to give the older chickens to-- craigslist is a wonderful way to give them away for free. Some people want a pet, others want a meal. If it doesn't matter to you, craigslist is the way to go.
That said, I keep my chickens longer than two years and I use a light in the winter on a timer so the egg production stays pretty steady throughout the year (except when some are molting their feathers)

Love chickens. Still have an ancient copy of Murray McMurray to browse thru. I met some huge blue hens at Godolphin House in Cornwall last month, gorgeous colour and acted like Buffies, very calm & sociable. I asked - they are a Maran-RIR hybrids, Meadow Sweet Blue Belles, rooster is all colours.

Kristin, this is one of the best chicken-keeping posts I have ever read ;) I chuckled when you said "if you have livestock, you will have dead stock. Get over it" LOL!

Love, love, love your blog! And your knitting books ;)