Here's another peek into our farmhouse courtesy of Rikki Snyder and Houzz. This wall of bookcases is at the west end of our long living room. The bookcase was here when we moved in and was probably added to the room in the late 1940's when a local architect from Greenfield named Jimmy Britton bought our farmhouse to use as a summer house for his wife and 5 children. (Greenfield is only 8 miles away!) Mr. Britton is a local legend in old house circles in these parts. He was evidently involved in the creation of Historic Deerfield and many of the details he added are similar to those at Historic Deerfield. Mr. Britton is probably the reason our house is still standing because it was evidently in rather poor shape when he bought it. He had to replace much of the fieldstone foundation with cement and all the windows. He added an ell to the east side of the house which I will show you tomorrow. We are lucky he kept much of the original feeling of the original 1751 cape style home. Our home has an original large center chimney fireplace with working fireplaces in the three main downstairs rooms and the original domed bread oven which we use to make our own wood fired pizza. 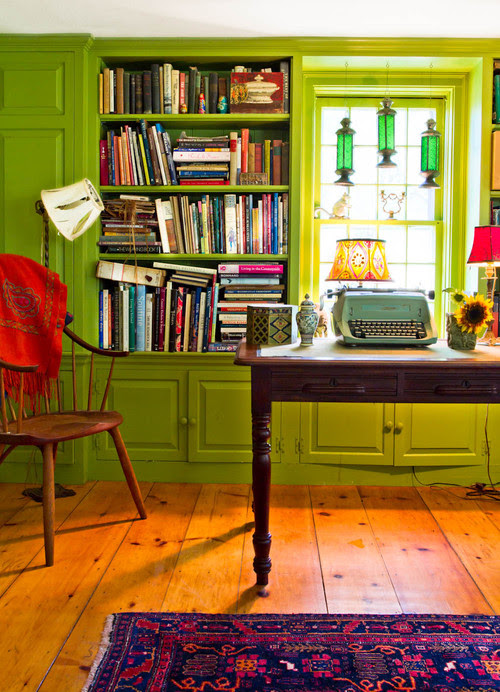 I painted the bookcases a bright green color when we first moved in. I'm sure Mr. Britton was rolling over in his grave. It looks rather bright in the photo but when you are actually here in the room, it does not read as bright. It is full of books on textiles, animals, and farming - no surprise. The hanging lanterns in the window were a gift from my friend Sally. The lamp in the window is one of my own painted lampshades. The lamp on the left needs to be fixed and if I can just find someone to do it I will be happy. We decided to leave it in the picture because it was so quirky looking. The orange cashmere throw on the chair on the left is from my book Colorful Stitchery. 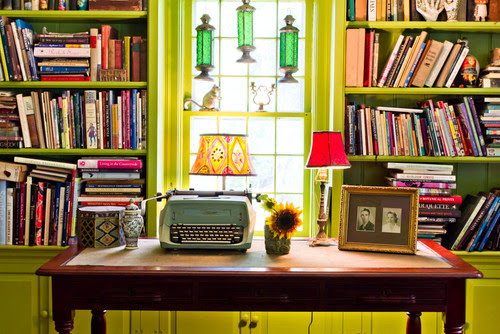 The photo above is a little detail shot. The typewriter was my Dad's. He used to send me notes when I was at college that he pounded out on this thing. He would also include a check. I can still hear the clicking of the keys. The photo on the right are portraits of Mark's parents Betty and Norman from the 1940's. I never knew Norman because he died when Mark was young. The desk is from an antique store in Northfield. I just got it. I have been looking for this desk for at least ten years and it finally appeared. I used some of the advance from my upcoming book to buy it. I always buy a little something for our house with an advance so that I can say "Oh yeah, that desk is the sunflower book." Otherwise the money disappears into the ether. 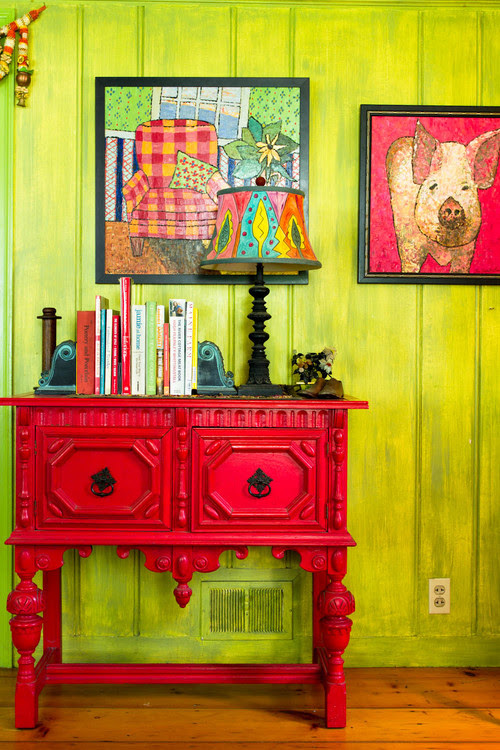 Immediately to the left of the bookcase is this wall. I painted the wood paneling using a dragging technique. I painted a base of yellow and then using thinned olive colored oil paint, I dragged the second color on top. I forgot to paint the outlet cover. Oh well. The chest is from my Aunt Jennie. It was an ugly color oak when I got it and so I painted it this gorgeous shade of red with glossy oil paint. I love it. The lampshade is another I painted. The base I had assembled by a local guy out of old lamp pieces I collected at flea markets and antique stores. The two oil paintings are by me. The pig was the first pig I raised - her name was Pinky and because she fed us, I thought she deserved to live on in our home as art. 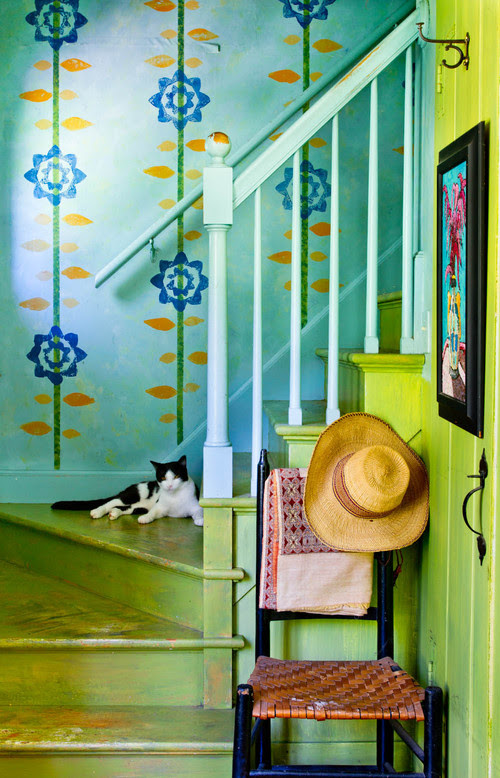 The Staircase by Photographer Rikki Snyder

At the other end of the living room is this stairwell that goes to the second floor. That is handsome Ziggy there on the stair tread. I did a colorwashing treatment to make the mottled turquoise background on the wall - there are probably 5 colors layered on that wall all put on with old toweling. To make the green stripes, I put up two pieces of blue painters tape an inch apart and then stippled the green between it. To make the flower and the leaf shapes, I used kid's fun foam mounted on insulation board. I have a tutorial for this technique (on fabric though) here on the blog. The stair treads were colorwashed too - this time using latex paint and building up 3 colors of paint over a primer. I need to re-do them - one day. The little chair came from Mark's parents and the painting is by me of amaranth from the garden.

Thanks again Rikki for taking the photos! Hope you all are enjoying the sneak peek.
at August 29, 2012

How beautiful! I love it. Regarding the green paint in your living room, I was recently at Mt. Vernon, where George Washington's (or Martha's) dining room is a very bright green. The guide said this was the original color, very fashionable and probably expensive at the time. So your room may be authentic by accident!

Great DESK purchase! -- NOW, get IT *OUT* of the Direct SUNLIGHT!!

North and west end of the house so that although it looks sunny, it is actually really dark! I'm still wondering how Rikki the photographer got the room to look so bright. That's why she went to photo school for!

Your use of colour in your home is inspirational! (just like everything else you do). Now I want to rush out and buy some bright paints and put some colour in our home.....just got to get over my husband's cautious objections........

Oh Kristen! It is so fun to see your house again. I have fond memories of my trip there with Sally, Sandy and Missy. These photos bring it all back, your approach to color is just amazing. Do you think your trip to Charleston Farm House in England was the spring board to your passion for decoratively painted walls? If so, I'm glad you made the trip. Your house is really thrilling to see. Thanks for sharing it.

These pictures are just beautiful. I would never have imagined these colors would work so very well together. I'm feeling the need to paint something now!!

Your house is beautiful, so creative! The way you showcase your treasures is very inspiring. Thank you for sharing!

Would it be a big problem if I moved in this weekend?

My husband would head for the typewriter, while I would inspect the bread oven. I love the joy of the house, but the painted lampshades would look great in my sewing room.

I'm loving the green bookcases and trim!!! Would you mind sharing the particulars on what brand/shade/type paint you used?