Updates - My Farmer and Pottery

Farmer Mark had his second hip surgery last week and he is resting and recovering. He had a different procedure from the last hip replacement which is supposed to have a quicker recovery - it is called anterior as opposed to posterior. He went back to the doctor this week for a check-in and they are very happy. He is sitting and moving around with a walker. He has been on some nice easy short walks. You can only imagine the frustration he is feeling not being able to take care of his animals. Last year he discovered farming videos on YouTube and they are keeping him somewhat entertained.

This is one of his favorite YouTube channels called FLANK. It is about British Farming and features a Mum - Sarah - being filmed by her son Rufus who comes back to the farm he grew up on. The mum is quite hilarious and I find it entertaining too. Check out their first introductory video here.

I'm doing my best juggling the house, the family, the healing farmer, the garden and the sheep. Luckily most of the sheep are out on pasture grazing and as long as the grass holds out and they stay in, they aren't much trouble. I say that - but last week I spent an hour and half along with some neighbors getting 12 sheep back in their fencing. One ewe got her head stuck in the electronet and the rest escaped. She is fine and they all went back in eventually. 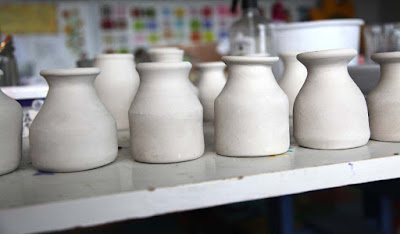 I have been accepted into the North Quabbin Garlic And Arts Festival in Orange. MA which happens September 28 and 29th. I will be selling products of my own design - tea towels, books and whatever pottery I can get made. I have heard that it is a great event so I am super excited for it. Evidently people travel from far away to attend. I had better get busy making so that I have enough product to make a good display.

I found this bookcase on the side of the road a couple weeks ago. It was black and looked like it had been in someone's garage or basement. I am always on the lookout for shelves for books or supplies or my pottery studio. I took it home - luckily it fit in my SUV - and painted it in this pretty green color. I've been filling it with my pottery that is waiting to be fired. 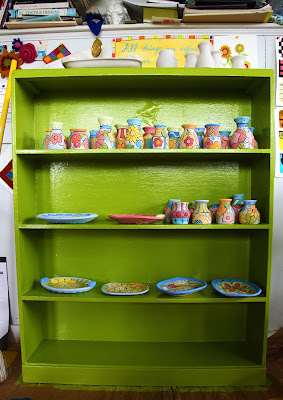 Here are some other pieces that are waiting to be bisque fired. My kiln is a Skutt 1027 and it takes me a while to fill it. I think I have almost enough ware to fire so I will do it while The Farmer is recovering from surgery. 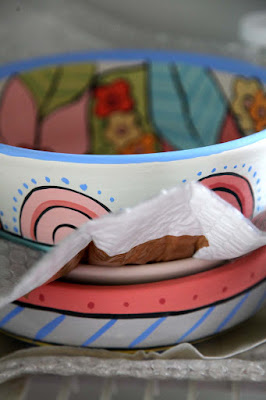 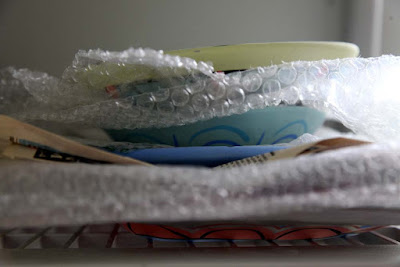 Hope all is well with all of you as we head into the beginning of official summer.
at June 25, 2019

So glad to hear your DH is doing well. I had been wondering. You have a lot on your hands and I appreciate seeing your blog post and lovely photos.

Thanks for the info on the FLANK...so enjoying watching those videos.

Beautiful pottery! So glad to hear your farmer is mending well.
xo
Sally

I watched the intro to Flank and now I'm subscribed and looking forward to more. Thanks for the tip.

The side of the road bookcase looks great. I love those sorts of finds.