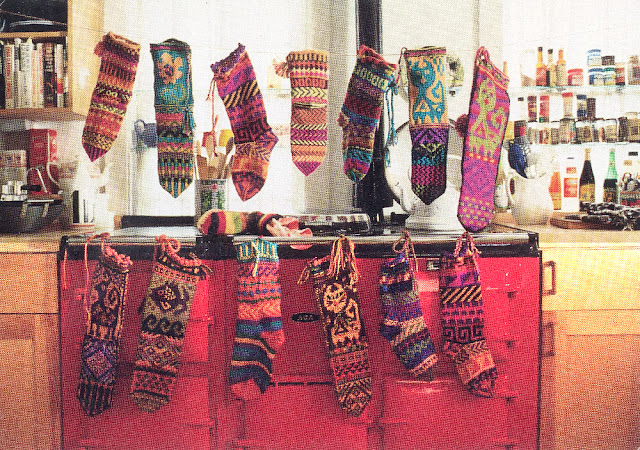 The idea for the Marvelous Mukluks came from a pair of handknit mukluks that my sister Jenn gifted me. I think they were made in Afghanistan. I loved those mukluks - I wore them as slippers for several years until they fell apart. When I started The World Knits Collection, I thought it would be fun to do a mukluk pattern for American knitters. At that time, there had never been one published - at least that I knew of.

I called Meg Swansen of Schoolhouse Press and asked her about mukluks - since she was THE person who knew everything about knitting at that time. She said that she had a book that might help and inspire. It was called Anatolian Knitting Designs by Betsy Harrell and was published in 1981. This is the book below - still in my knitting library. 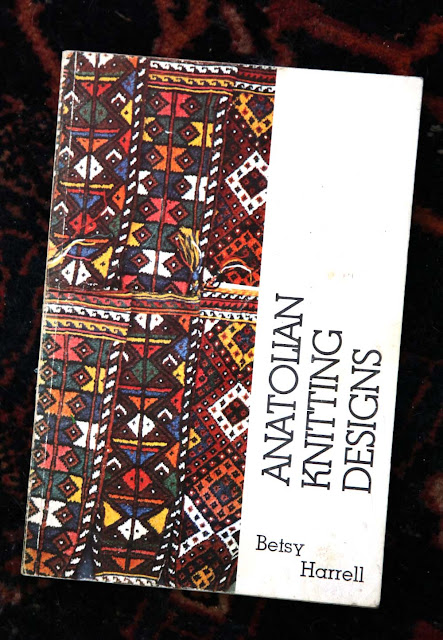 It is a black and white book that is printed on very thin, almost newsprint feeling paper -- so thin that the printing on the backside shows through to the opposite side. It tells the story of the knitting community in Turkey that was based in a shanty-town above a castle called Rumeli Hisar. Anatolian Knitting Designs documents the different charts that the knitters in this community used. It has an anthropological feel to it as the author researched the community and interviewed the knitters who made the socks. There are a lot of footnotes (something you don't see in most books). Here is a spread of the charts. These are called Thousand Branches, Walnut Kernel, Tough Nut and Walnut Flower. I would assume from these names that walnuts feature in a lot of their traditional food. You can see how thin the paper is with the charts on the other side showing through the page. It is also nice that there are drawings to illustrate what the chart knits up like. 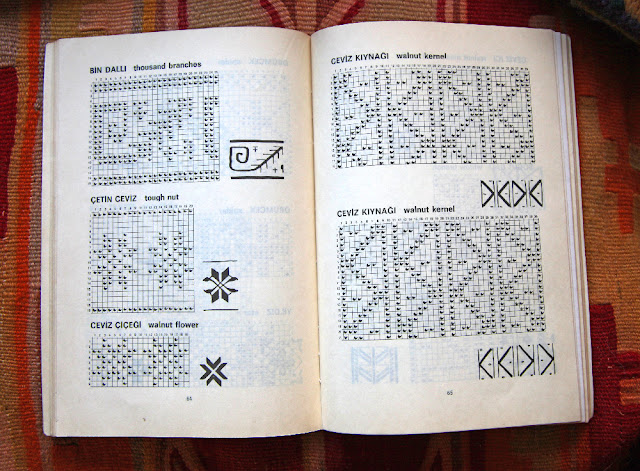 Anatolian Knitting Designs is mostly black and white and has some very sparse directions for a mukluk at the very end. The thing I find most charming are the colorwork graphs shown above. Each chart has a Turkish name and an English translation. Upon looking at this book again, I must sit down and read it cover to cover. It is available on Amazon as a used book. It looks like Schoolhouse Press sells it also in a newer version with a spiral binding. I just spoke to Meg and she said she is going to get back to me if she can get a hold of it again.

Considering the situation of the world right now, it makes me wonder about the knitters in this Turkish community - if the community and the knitters exist anymore. Are these traditional Turkish stockings still being knit? I have never had the chance to go to Turkey but if anyone has been and knows anything, I would love to hear.

The big question for me when designing the Marvelous Mukluks was how to make the heel. The toe was shaped in a point like a traditional Scandinavian mitten - a technique I had done many times. The heel was shaped exactly the same but in the middle of the piece of knitting. The answer to how to do this was to do an "after thought thumb" but make it an "after thought heel". This technique was popularized by Elizabeth Zimmerman. I decided to begin at the calf and work the tube down in patterns until I got to the heel section. At the heel, I worked about half the stitches with a scrap of thread. The scrap would be unknit after the entire mukluk was made and then the heel would be shaped -- just like the toe. It really was very simple once I tried it.

I wrote the directions for the Marvelous Mukluks in 5 sizes from baby to adult. My sample knitters went to town, making up their own versions using my charts and my selection of colors.

We took the photo at a woman's house on the Rhode Island coast. She had an incredible red Aga stove that we could hang the mukluks on. We had extra mukluks so we rigged up a "clothesline" situation. I remember that everyone had to remain incredibly still - barely breathing - in order to get the shot. This of course was before the days of digital photography. We were using natural light. This is one of my very favorite photographs that I had the pleasure of having a hand in. And I have alway lusted after that red Aga. I will not ever have one of those Aga stoves but a girl can always dream! 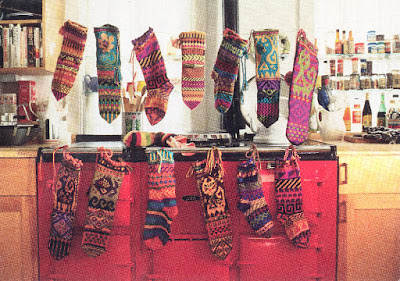 If you want to keep the pattern in your Ravelry library, make sure you order via the Kristin Nicholas Ravelry store (not my website). 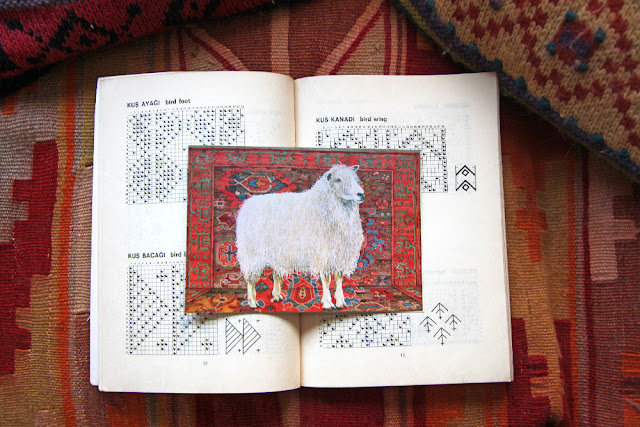 I found this card inside the Anatolian Knitting Designs book. I thought I would post it here. How gorgeous - a beautiful wooly sheep juxtaposed against a wool rug full of beautiful pattern. I haven't been able to track down the image - otherwise I would give you the information. All info on back of card led nowhere.
at January 30, 2020

You have probably already thought of this, but just in case, you might try cropping in close around the postcard (without the book in the back) then do a Google Reverse Image Search. (Google can tell you how.) :)

I love your blog! Been a reader (although not a knitter) for a very long time.

Hi, Kristin. I used Anonymous the first time because I had technical difficulties... (user error on my end).

I did a reverse image search of the postcard you found via Google Images.

Here is some information:
Ditz has exhibited paintings widely, namely at the Barbican Concourse Gallery, City of London, The Royal Academy of Art, London, Musée Fabre, Montpellier, St. Edmund Hall, Oxford, and the Wilma Wayne Fine Art Gallery in Old Bond Street and also at her own gallery in London.

Thanks so much Brandy. Will look into it. Did you find it for sale anywhere?

The fineartamerica.com site has LOTS of items - bags, pillows, even a shower curtain!

Oh this is awesome Brandy. Thx for sharing. I will share with my followers next week. Really appreciate your work tracking it down!

I am re-posting this story here today. It was originally published on May 14, 2011. It is rhubarb season here at the farm and at this time o... 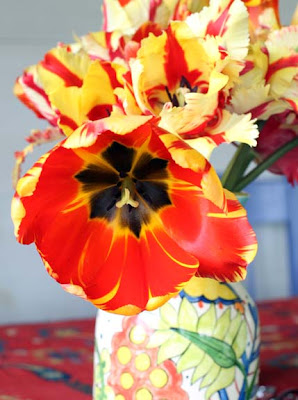