Kittens and Cats and Girls

Our litter of beautiful kittens has all moved on to their new homes. In this difficult and unpredictable time we are living in, these kittens are a welcome diversion and loving addition to the four families that have brought them into their homes and lives. Here is a photo of our neighbor Debbie who adopted one of the kittens to be a sister to her cat Hamish (who came from a litter last summer). Her name is Greta and I saw her today outside watching Debbie rake and Hamish chase leaves. So nice we will be able to see her frequently. Greta is filling a void in Debbie's family's life as their old dog Blue just passed away. So glad we could help. 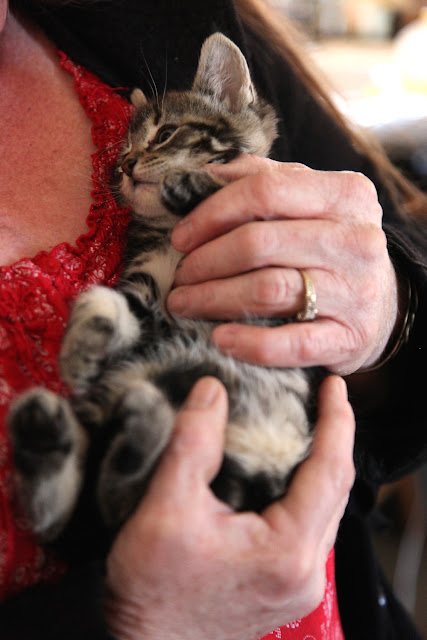 I must admit, I was not much of a cat lover as a kid. My family always had a dog and it had primo status in the eyes of the family. Mostly I think this was the case because neither my Mom or Dad had grown up with cats. We did have a cat that my sister Lynn brought home one day and after many days of begging, my parents let the cat -- which we named Tabby -- stay. I was always a little fearful of Tabby because of her claws. (What did I know?) Tabby lived to be 23. When she passed away, the mice moved into our house and they have been there ever since.

I never fully understood the psyche or beauty of cats until we adopted our first cat when we moved into our first house. Her name was Sophie and she was a beautiful brownish grey tortoiseshell cat. 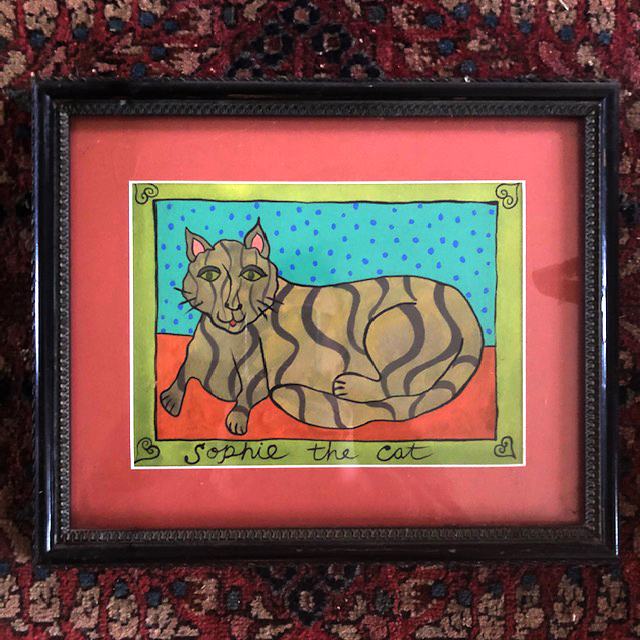 Sophie wasn't particularly loving and she had a real mind of her own. She frequently stayed out all night hunting and I had to get over the fact that I couldn't control her like I could do with our dogs. Once I got used to having a cat, I wanted another who might be more friendly and sweet. One of my co-workers had a litter of kittens with double paws. Willie was a funny guy but he loved his cats more than life. I asked if I could adopt one of his kittens and he said okay. Madeline was a beautiful tuxedo cat who was actually a Mister so we called him Mr. Madeline. He was a real love and sweetheart of a big boy.

The Farmer was always a cat lover and his tales of Stubby the cat who had her own stool at the family's table was one of the things that endeared him to me in the beginning. How couldn't you like a family who let the cat sit next to them at dinner?

Since we have lived at this farm, we have had many cats. Ours are indoor outdoor cats who we count on to help with the vermin. All of them have their own personalities and quirks. 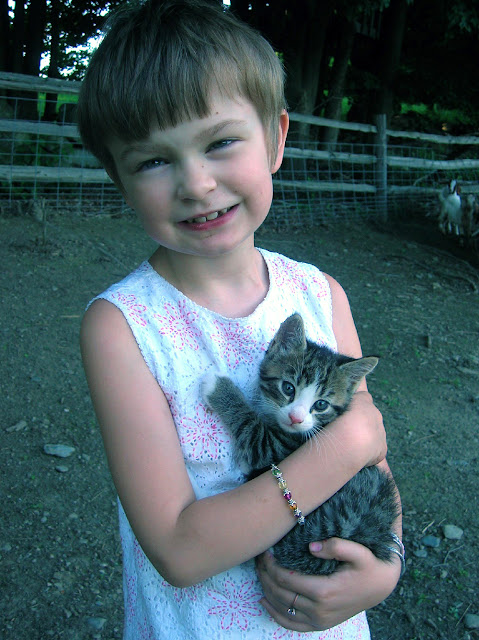 As a little thing, Julia was always attracted to our cats. I think because of her early motor delays, cats were easier for her to hold and not nearly as jumpy as a Border Collie who could knock her down so easily. There she is with one of her kittens Zoe Sophia. 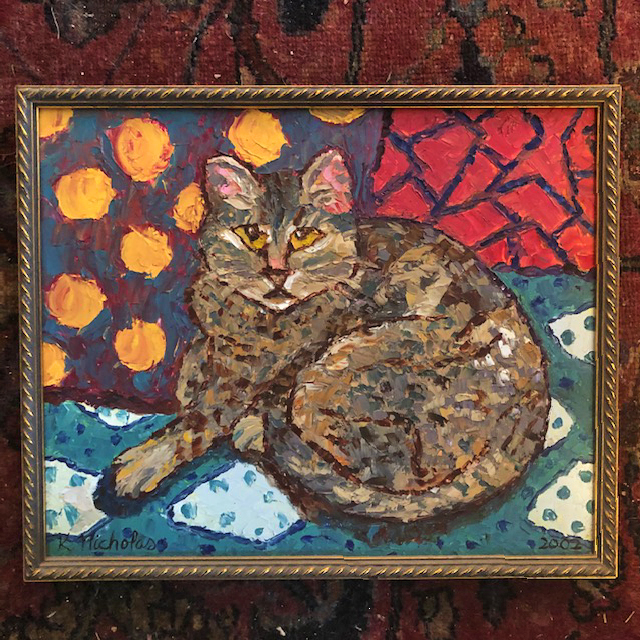 Our first Mama Cat was Vera (shown in the painting I did of her above). She was the Mama of Charlie who just passed away last year at 18. That's Charlie and Julia in the photo (by Rikki Snyder) below. 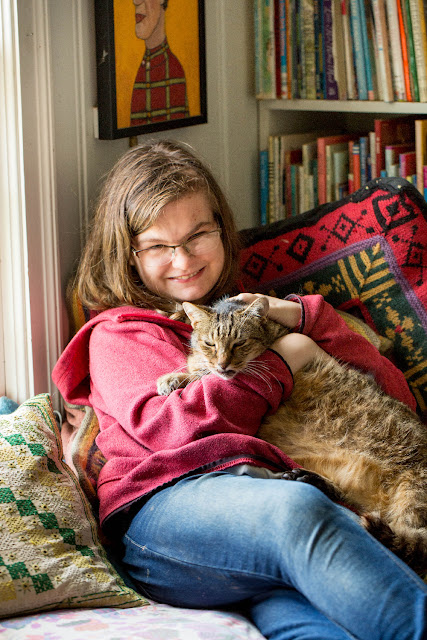 The Farmer came home one day many years ago and told me that one of our neighbors had a litter of kittens and there was a beautiful medium haired calico. Me, being a color person, I had always wanted a colorful tri-color cat. He knew that. We went to see the kitten but she was spoken for. I put my name on the list if there were ever any more like her. Marilyn called us a couple months later and told us the home had fallen through and if we wanted her, we could have her. She had named her Lily Pons after the opera singer because the kitten was very vocal and loud. 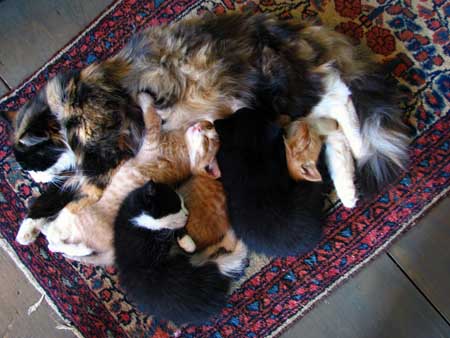 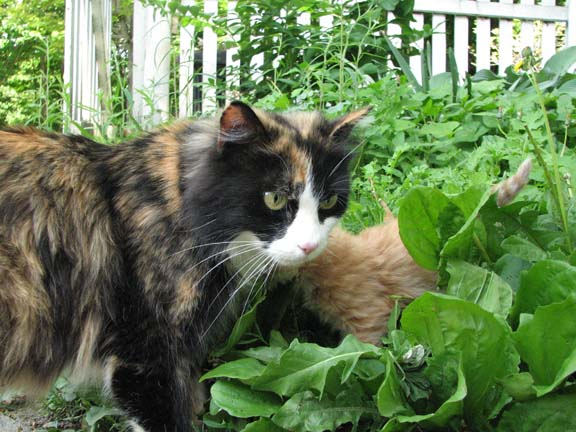 Lily Pons was a wild one with super intelligent cat instincts. She was a great hunter and would disappear for weeks at a time and I would worry. She would eventually come home and all would be fine. She was a great mama and raised many beautiful kittens. We still have two of her kittens - Tommy and Mittens - who are quite old now. Rosie who is the mama of the current litter is the great grand daughter of Lily Pons. Obviously cat genealogy is a thing here.

With this latest litter, I thought it would be fun to photograph each of the adoptive families with their kittens. I got as far as two families and then the virus interrupted and I forgot about the task at hand.

Our friends from Northampton have had their names on the kitten list for several months. The two little girls were so excited when Julia told them their kittens had been born. They came one day - the whole family in kitten headbands. Each girl picked out her own kitten when they were very small. There was such anticipation in their household for their new kitties. They visited once more to see the kittens in a new growth stage. The weeks went by. I think the girls thought the day would never come.

The two girls had hand drawn kitten count-down calendars in their rooms and sent us photos as the days were X-ed off. They named them Sparky and Jade. As the days counted down, I got more pictures. Here is the series. Can you see the anticipation and excitement building? 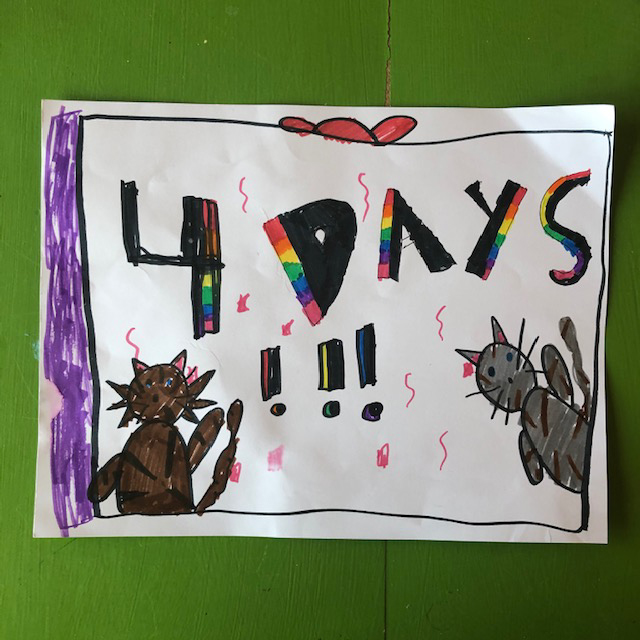 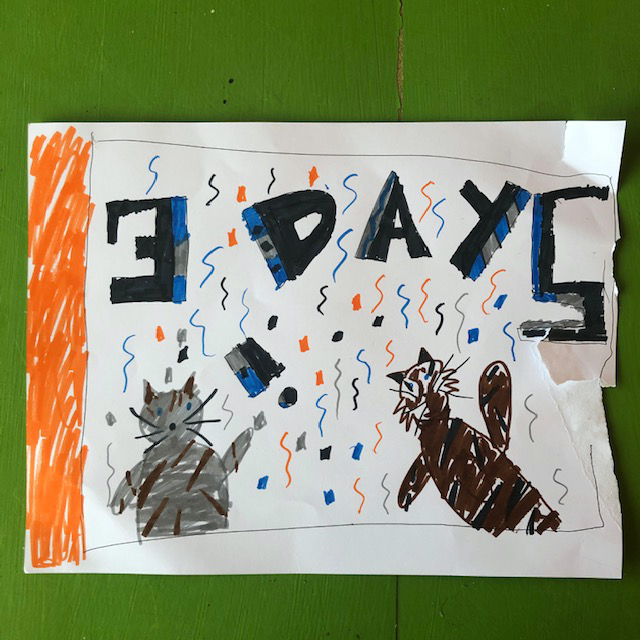 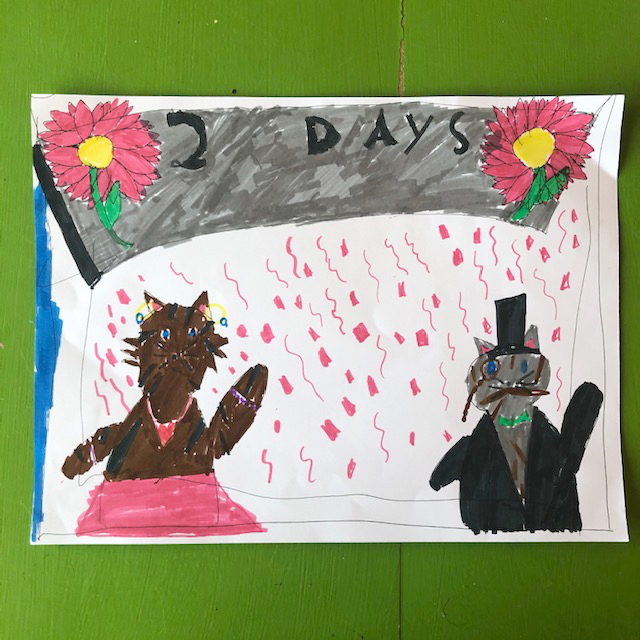 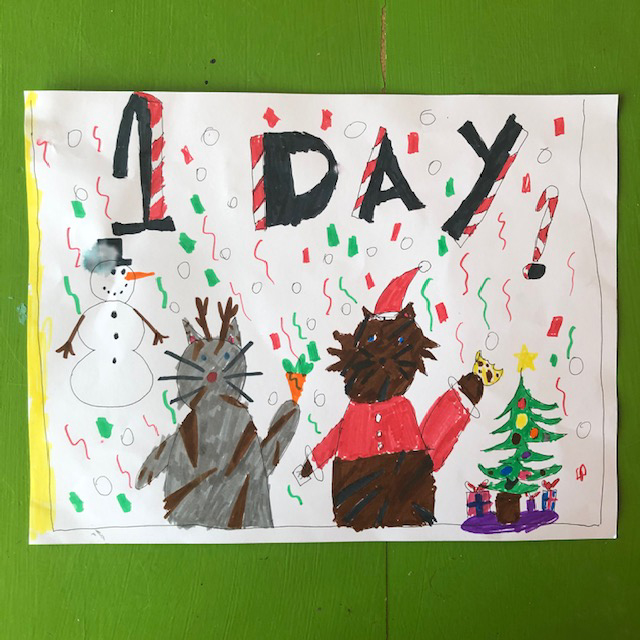 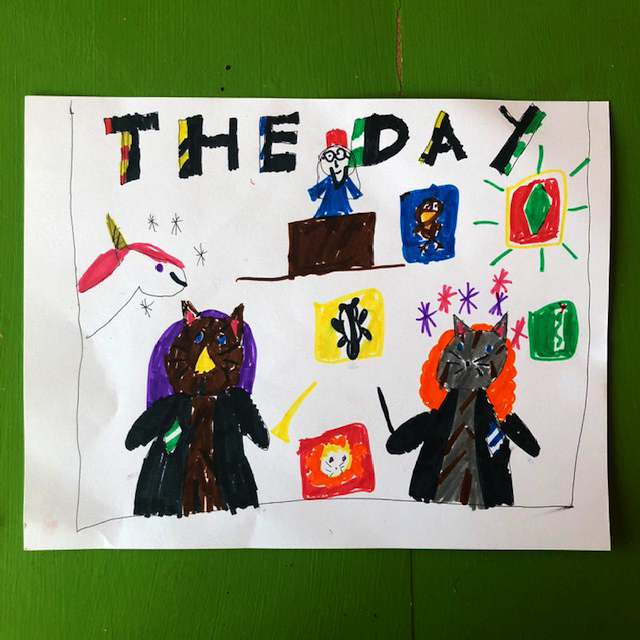 THE DAY FINALLY ARRIVED as you can see in the picture above. I love children's art and was so happy when Laz gifted me with her pictures.

Here's a photo of Julia with two of our current cats Daisy and Charlotte and Laz and Simone with their new kittens. Precious, aren't they all? Kitten girls for life. Hopefully we will get to see the kittens as they grow up. We know they will all be loved in their 4 new homes. Thanks everyone for putting up with the cat stories. 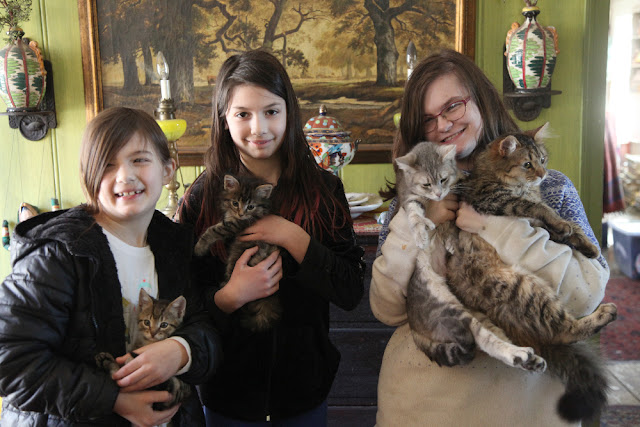 I just love cats and dogs. But my husband is allergic. :(. I enjoy your photos.

Having cousins who farm, I get 'barn cats' come and go with time. Also get how handy a cat is for an 'older' home as the mice always, ALWAYS find a way in. My neighbors last year asked to borrow my cat for that very reason. They now have a cat of their own (Uki) I also like having a cat, just because. And to balance it out we have a dog also.

Kristin, this is an especially sweet post, thank you! the children's art is just adorable, and the ones of Julia aka the Cat Whisperer are lovely. Let's do a FaceTime this week?

Sounds good Gail. We have been FaceTiming with my Mom and it’s a good way to catch up.

I so wish we lived closer as I would love one of your kittens!

So much cuteness! I am such a pet person, but we have a badly allergic asthmatic kiddo, so we have a little parakeet. That said, he’s a love— he has the roam of the house, but he likes being on someone’s shoulder, preening their hair. :)

Love your cats and kittens, stories of them etc.

It has been 10 years since we lost Lucy, our 19 year old Maine Coon.

I took one of Kristin's kittens home after a knitting workshop. We had lost our only cat and we wanted another. This one was spectacular, our first with double paws, and distinctive markings. Julia helped socialize our kitten,at first a female who turned out not to be. Rudy is a special cat, comes when he is called and loves being with people. I am forever grateful to Kristen and Julia for him, and keep them appraised at times of his antics, of which there are many.
Thanks you!
Tamson

Love your kitten stories! Actually, all your animal and your creativity stories are great! And, I love you are posting your past patterns...deciding which ones to get! Stay safe!

Poor you— no critters. I gues you can live as a pet owner vicariously now.

A parakeet! How great. A pet is a pet. My friends Peggy and Bill had a parakeet land on their porch in NJ once and they took it in. It was a great pet for them in their older years. A pet is a pet!

You have great memories though.

Rudy is lucky to be so loved miss you Tamson. I hope you guys are healthy. Thinking of you often.

Thanks so much Patti. These times are difficult and I’m trying to write posts that will bring people relief and make them smile. Thx for reading.

Oh how I love your posts,but this one of cats,kittens and little girls is especially sweet. I have had so many cats over my 72 years and now have three. There is always room for a new one needing a home. Love your colorful life and your appreciation for the emotional times we are living thru. Marcia

I grew up on a dairy farm - cats were royalty there. We never had rodents (I never saw a rat running wild until, as a young adult, I left the farm and moved to Boston). We had dogs too, and they were beloved, but they were pets while the cats were highly respected workers. From my earliest memories, I found cats fascinating and gorgeous - independent, instinctual. If they liked my company, I felt like a special chosen one. Cats are incredible!

Happy February everyone! It's been a slow slog back to making but I'm back. I finally finished a sunflower pillow that has been lang... 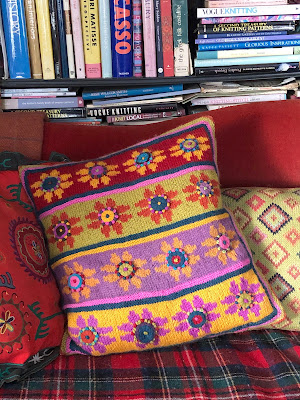